On Friday when we were driving up to our campground in Jasper, Greg wanted to do a hike.  Originally,  he wanted to Wilcox Pass but it is super steep and not for me, so we settled on Parker Ridge.  This was not our first time hiking Parker Ridge; we had done 12 years ago this August and we were miserable.  It felt hard and steep and even though the payoff when you get to the top is pretty amazing, we never did it again.  It just felt too awful to torture ourselves like that for no reason. But we tried it and wow, what a different 12 years makes hahaha. 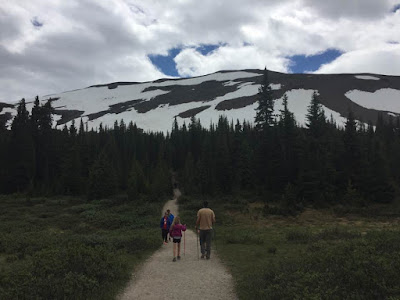 We arrived later in the day so it wasn't too busy.  The parking lot seemed busier then the actual hike itself but I think people were taking photos of what they thought was the best part of Parker Ridge.  As you can see in the photos, there is still snow near the trail and on the ridge and mountains. 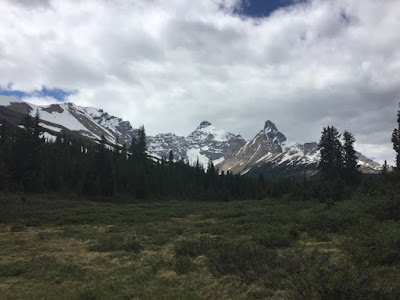 The nice thing about hiking Parker Ridge is that you are instantaneously able to see some stunning mountain back drops before you even are elevated. 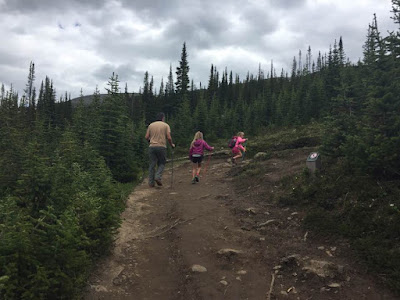 When we started out, we got out our down jackets because it felt really cold but it got warm quite fast despite the lack of sun.  Penelope was the leader for the first while and she loves being in the front. 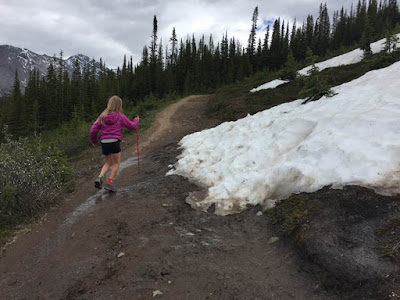 Soon we were faced with muddy trails and melting snow but none of us were bothered by it.  Seeing snow at the end of June makes us happy and excited especially if it is like this and not an actual snow fall haha. 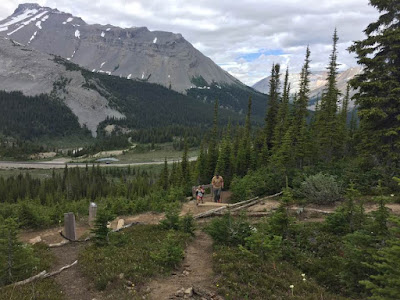 Penelope soon had to strip off her jacket and was no longer the leader.  She also knew that Greg carried the snacks too hahaha. 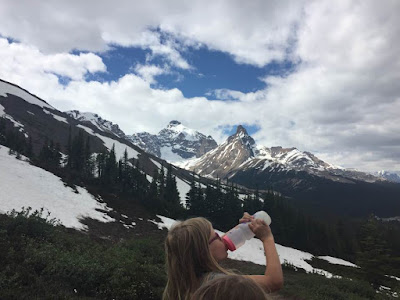 Seriously, it was looking pretty nice every time we turned around.  The Columbia Icefield area in Banff National Park is pretty phenomenal.  It is colder then most other places in the park but still stunning. 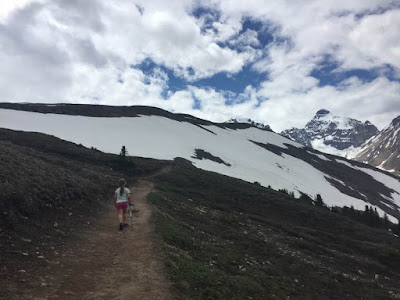 Eventually, the girls switched places and Penelope was out front with me and Greg was with Finley.  The trail to the top is mostly a bunch of switchbacks.  It wasn't as steep as I was remembering. 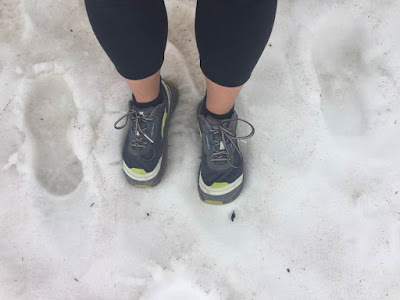 Much to the dismay of Penelope, I went off  trial to get a photo of me in snow.  I always do this in the summer months hahah.  I am such a nerd.  Penelope kept complaining about the hike and didn't care much about getting to the top.  She just wanted to be at her campsite.  Despite her complaining, she soldiered on. 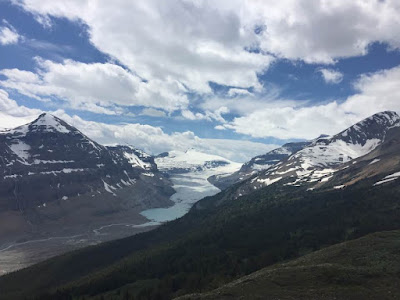 The best part of the hike is that once you get to the top, you look down behind the ridge and see Saskatchewan Glacier which is pretty cool for a girl from Saskatchewan. This glacier is the longest of the glaciers feeding off the Columbia Icefields. 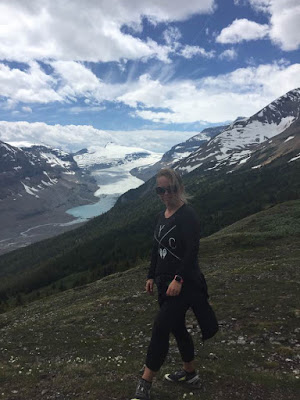 It was a little windy at the top.  I soon had my jacket back on with the hood tight around my head because my ears were hurting so bad. 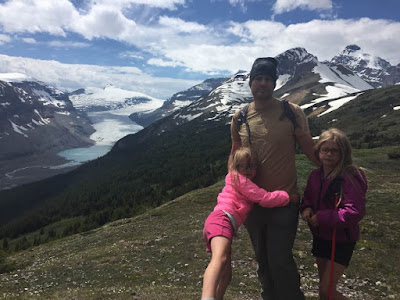 Greg and the girls at the top of the ridge with the saskatchewan glacier behind them.  Neither one of them looked impressed with the hike but Greg and I were sure impressed with how much better shape we both are overall then we were 12 years ago. 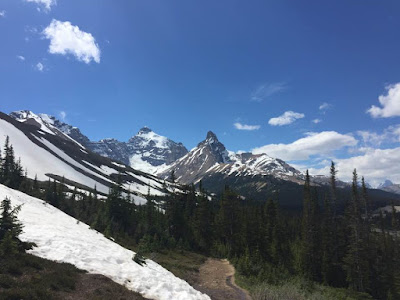 The clouds disappeared on the way down and the mountains with the snow covered tops looked amazing against the blue backdrop of the sky.

Parker Ridge is located in Banff National Park but it is actually closer to the town of Jasper then the town of Banff.  To get there from Jasper, drive south on Hwy 93 for 114km until you reach the parking lot which is located on the right hand side. If coming from the Banff side, it is 120km from the Lake Louise on Hwy 1 + 93.

This hike is about 5km return and has 250m of elevation.  It is considered to be moderate on most hiking scales and can be done in 2 hours although we did it in an hour and 35 minutes and that was with Penelope and I waiting at the top for Greg and Finley, stopping for a snack and taking photos at the top so it is a pretty quick hike if you want it to be.  They also have benches located around the switchbacks if you need a rest.  Greg and I used those a lot the first time we hiked this - in both directions.  I am glad we decided to do this hike again because it was soooooooo much better then we both remembered it to be.
at July 06, 2017
Email ThisBlogThis!Share to TwitterShare to FacebookShare to Pinterest
Labels: Banff National Park, Canada 150, Canada Day, Columbia Ice Fields, Explore AB, Hike AB, Hike With Kids, Parker Ridge