The Bridgette Bar opened last December just down the road from MEC and I have been dying to check it out ever since.  I actually had reservations there for Mother's Day but had to cancel them because Finley had a soccer game at that time and couldn't rebook since it is only kid friendly from 11-2 on Sunday's. 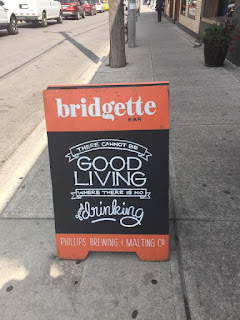 So when traffic problems on Deerfoot made me go downtown instead of back home, we made the decision to come here for dinner after Greg got off work. 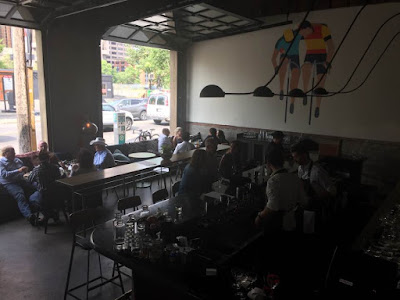 This is to the left of the door and is super nice. The windows are garage doors so they open and close based on the weather. 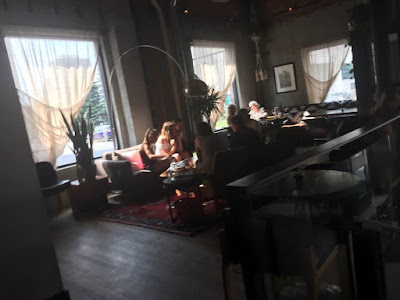 When you walk up the stairs to the greeter, this seating area is to the right and it is super nice and comfy.  It would be a great place to meet up with some girlfriends and drink some beverages for sure.   The guy seating us actually knew Greg's brother as his buddy worked with him at Ten Foot Henry and everybody thinks that they look so much a like (I am not one of those people). I really love the industrial ceiling and light fixtures and the vintage looking fabric, chairs and tables.  I would like the table legs in my kitchen, along with those fabulous orangey red chairs.  And the motorbike??  Fantastic.  Because of the name, I was not expecting something so vintage and industrial but I really enjoyed it. 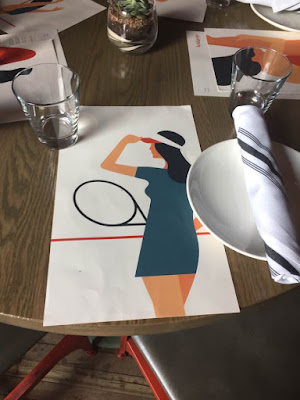 Adding to the vintage flare were these vintage inspired sport pictures on the back of the menus.  Greg thinks they might be from the LA Olympics but I have no idea. 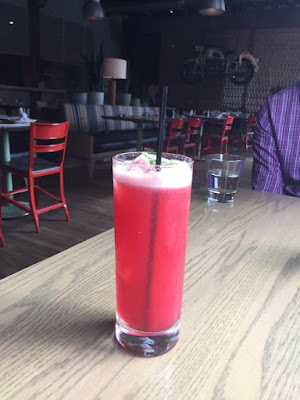 The first thing we ordered was drinks.  Greg had some Phillips Chocolate beer and I had the Shore Leave which was white rum, merlot framboise, montenegro, raspberry, peppermint, + lemon soda.  It wasn't as sweet as our server said it would be  but I still enjoyed it. 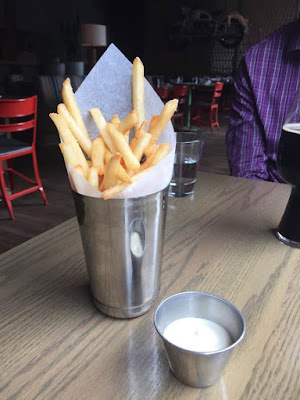 The Bridgette Bar is really set up for sharing which is my favourite way to eat.  You just get to experience so much more of the menu that way.  The first item we received was the french fries and the garlic aioli sauce.  I was sure I wouldn't like the garlic aioli because I typically don't like anything creamy like that but oh my goodness, it was so good.  The fries were amazing with or without the sauce.  So good. 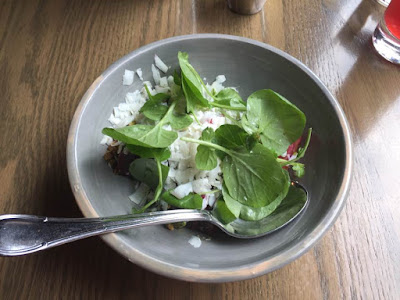 Next, we got the the Watercress + Charred Beet Salad.  I had no idea what watercress was but it looks and tastes similar to a beet.  Very tasty.  This salad consisted of beets, watercress, blackberry beet vinaigrette, Pistachio, Ricotta Salata.  It was quite possibly the best beet salad I have ever had and I have ate a lot of beet salad.  Greg and I have a rule that we must order everything that has beets in it at a restaurant.  The pistachios were the perfect touch and even though I don't like ricotta, the grated part of it wasn't bad with all of the other flavours. 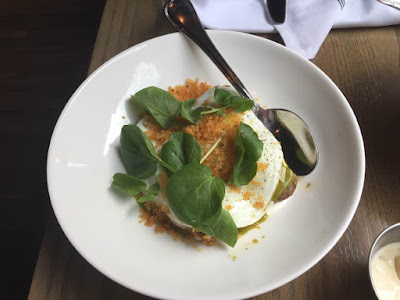 Next to arrive was the Lamb Sausage.  Greg loved this but I didn't much enjoy it.  The egg was good but the lamb sausage had curry in it and I don't like anything with curry.  It also had a cilantro vinaigrette and Labneh.  Greg would highly recommend this dish if you are a lamb lover. 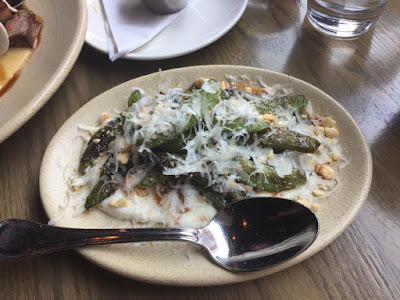 Our last two items were served together.  This one was the charred snap peas.  I love snap peas and was really excited for this but it was awful.  I had one pea and was done with it.  Greg had a few but we definitely didn't finish off this plate like we did all the others.  Along with the snap peas, it had pecorino, almonds, horseradish, and a sherry vinaigrette.  We ended up not getting charged for this dish much to our surprise.  Greg and I were discussing why they would do this and there were several reasons, nobody likes a bad review on social media, it still encourages you to experiment and try different items on the menu and just because they are a great company. 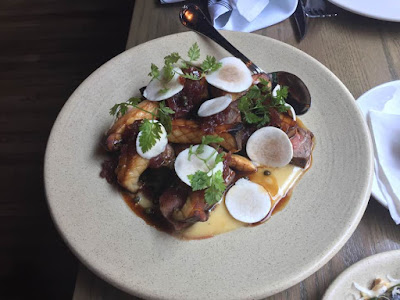 Our final dish was wood grilled beef strip steak.  It was hollandaise, king oyster mushrooms, onion jam and pickled peppercorn.  And it was amazing, like some of the best steak I have ever had.  They don't ask you how you want it cooked but we were not worried about it because that usually means it is done the way we like it or as Greg calls it, the right way.  The king oyster mushrooms kinda weirded me out but still good.  I am drooling over this as I write this blog post. 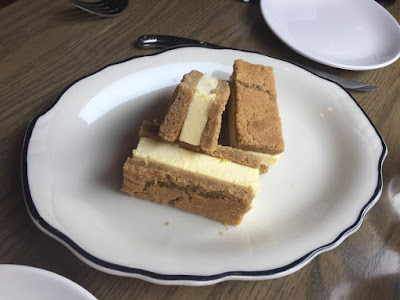 For dessert we ordered the ice cream sandwiches that were made with olive oil ice cream, brown butter and lemon.  There were other alternative great dessert options but we were most intrigued with the olive oil ice cream.  And while I don't love much with lemon, the smell and flavour of this was unreal.  It's probably my second most favourite dessert out of all calgary restaurants (first being the ice cream sundae at char bar).  It was hard to finish these because we were both so full. 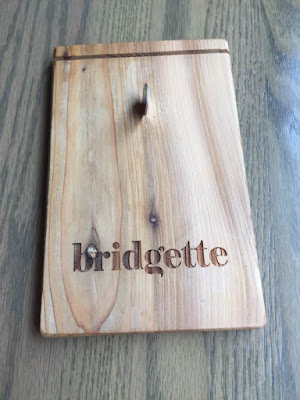 The bill arrived on this cutting board along with a vintage postcard.  It is magnetic at the top and it all stayed in place with a dime.  It was pretty cool and Greg enjoyed playing with it.

Despite the fact that I didn't like 2 out of they 6 dishes we ordered, I would still easily give this place a perfect score because everything else was still amazing and I loved the layout of the bar and the atmosphere was fantastic.  The staff was very friendly and I appreciated the fact that they comped the peas even though we both would have gladly paid for it and not made a fuss about it.

We finished off our date night with a trip across the street to MEC where we bought a new camping stove and grill for it.  Here's hoping it lasts longer then the coleman stoves we have purchased over the last 12 years.
at July 14, 2017
Email ThisBlogThis!Share to TwitterShare to FacebookShare to Pinterest
Labels: Calgary, CalgaryEats, Local Eats, The Bridgette Bar, YYC