On Friday Penelope turned the big number 7.  She had been counting down until her day for quite awhile and had very specific requests on how she wanted her day to start. 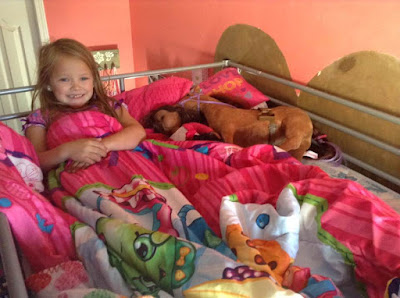 It is a birthday tradition in our girls to have their photo taken on their birthdays the moment they wake up.  This is a replica photo of this moment because after I took this photo and went downstairs to make her breakfast, my phone somehow seized and I lost everything on it.   I was pretty devastated that I had lost it and wouldn't have the photo for her to look back on so we decided to recreate it.  Everything is almost exact although her smile is a bit bigger then it was earlier but not by much.  Penelope is always a morning person but even more so on her birthday. 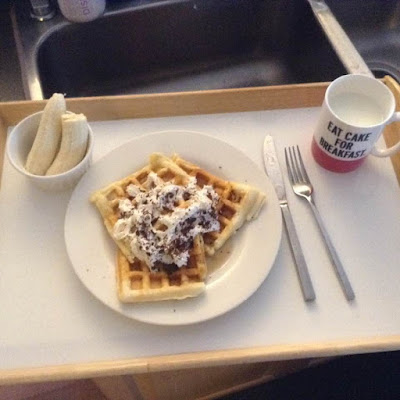 She requested a banana split waffle with the bananas on the side.  I bought some whipped cream but didn't have any sauces so we used epicures cocoa crunch or something like that.  This is when I noticed my phone had died and while I tried to resurrect my phone the whipped cream became unwhipped.  She didn't care though hahah. 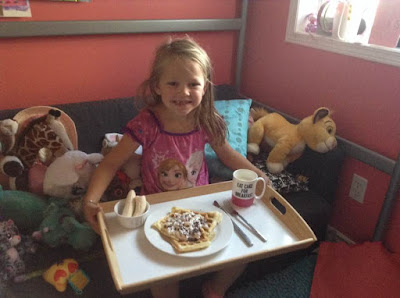 Here she is getting her breakfast in bed or i guess couch.  I wouldn't let her have it on her bed since it is a loft and it might not end well so she had it on her couch instead.  She drank no milk, had one waffle and one bite of her banana.  We opened presents the night before because we weren't going to be home for the whole day and Greg wanted to see her open her photos.  I lost all those photos because my phone died but it was a good time.  She did open one present from my mom and from her cousins Easton + Ashton that morning so she at least had something.

It was supposed to be a super awesome day of fun for Penelope but instead my iPhone died and I had to go to the Apple Store at Chinook to get it fixed or at least help me somehow.  However, when I got there they ran a bunch of diagnostic tests where they told me it had seized and it would not be turned on.  I pay $1.29 for extra iCloud space but for some reason I never turned that on on my iPhone only my iPad.  While I chose to backup my iPad I have no idea since I use it strictly for streaming tv and the occasional pinterest binge session.  The good news was that my iPhone still had warranty so I got a new iPhone for free but lost all my photos.  I had photos from our summer vacation, saskatoon, the lemurs, vancouver and random ones in between. Thankfully I posted a lot of photos on my blog that I can save for some sort of memories of the trips and Greg had some from our trip too.  I cried for a solid 30 minutes over this.  I felt bad for ruining Penelope's birthday but she didn't seem to mind and picked out a new dress for her to wear the rest of the day at H+M.  Love their $6 dresses! 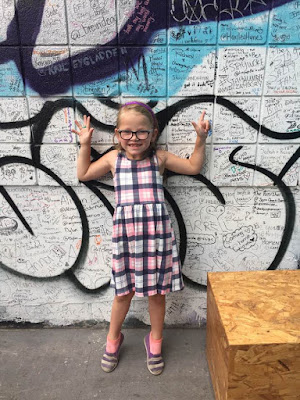 This is the dress she picked out.  She thought it was perfect for Country Thunder and next summer's Calgary Stampede.  This is her "I am 7" pose on the cool graffiti wall at Re:Grub. 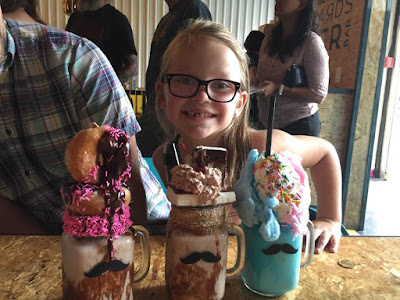 Penelope loves ReGrub and that is where she chose to have her birthday lunch.  She had the cotton candy milkshake as that is her favourite.  Penelope had the oreo ice cream sandwich milk shake and I had the double donut one.  I love their donuts but I don't like chocolate sauce so I ate one donut and Greg had the other one.  We all had mini corn dogs and asiago fries while Greg had the space cadet burger.  It was delicious all around. 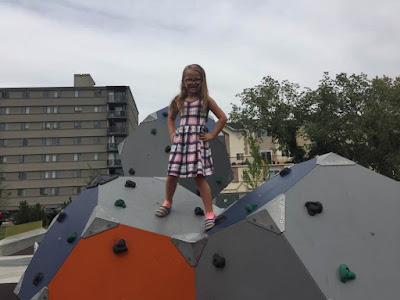 After lunch, we headed to Thomson Family Park to play and it was so awesome.  The girls and (everybody) had a great time and it wasn't even busy! You can read more about this later on this week. 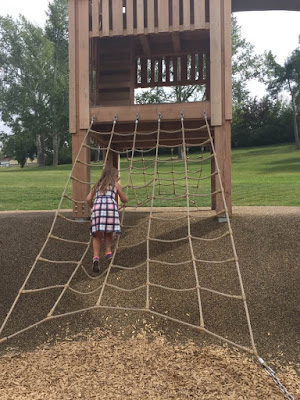 Then we moved on to another playground at Confederation Park.  It is a brand new natural park and it was crazy busy.   I will have a post on this park too soon! 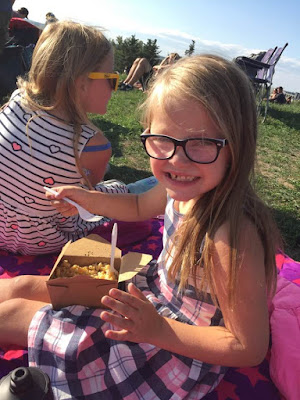 After all the playground play, we headed to Prairie Winds Park for Country Thunder.  We were gonna ditch that night but Penelope really wanted to go so we headed there.  She had macaroni and cheese from one of the food trucks there and she loved it. 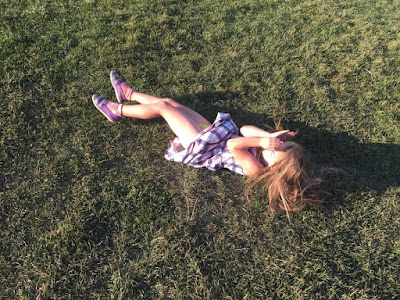 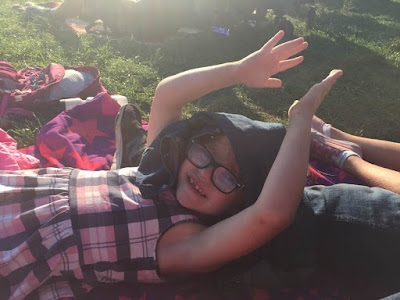 Penelope was the ultimate concert going person - she clapped, danced, moved her hands, screamed and yelled every time the performer asked the audience to participate.  She was loving it. 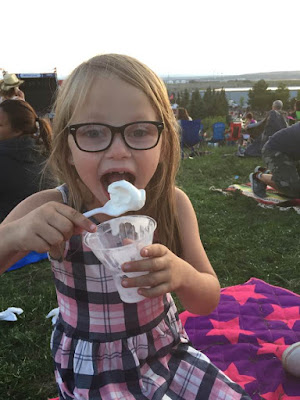 In between Dallas Smith + Brad Paisley, the girls got some ice cream and Penelope was very excited by it.  It was a hot afternoon so the ice cream was a nice treat since we were outside since lunch time. 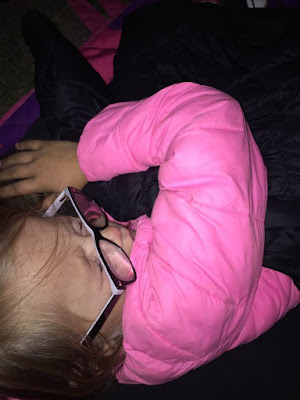 Penelope tried hard to stay awake until the very end but she crashed in the middle of Brad Paisley.  Despite the crappy morning dealing with my iPhone conundrum, she said it was her best birthday yet and that made my heart happy.

at August 21, 2017
Email ThisBlogThis!Share to TwitterShare to FacebookShare to Pinterest
Labels: Birthday, Penelope