This is the fifth and final post on our summer 17 vacation! We hadn't planned on hitting up Yosemite National Park but after Penelope was terrified at the bat cave on the 2nd day of our trip, Greg realized that the last few days of our trip in a volcanic park in California was not gonna work after all.  He has always wanted to go to Yosemite but campsites inside the park book up 100% on the first day it opens.  But he found a campground outside the park that still had room so we booked it. 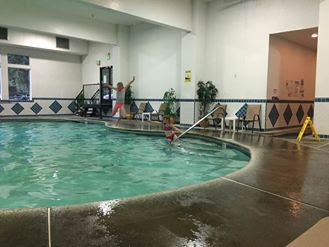 The campground shared both an indoor and outdoor pool with the hotel beside it so that worked out well.  We spent our time in the indoor pool because it was 38 degrees out and less busy then the outdoor one.  We played before and after supper and it was a great way to tire out the kids quickly haha. 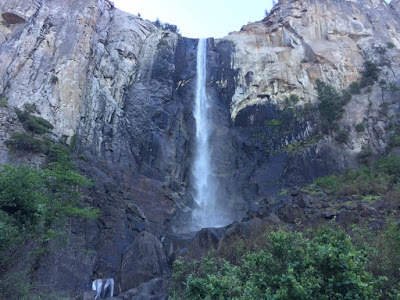 Yosemite is a super tiny park and gets busy super fast so we were up early and got their early before it got busy.  We did BridalVeil Falls, Washburn Point, Glacier Point and one other point before it got crazy busy and the roads backed up.  You can see how wide the waterfall is in the spring and how much it shrinks over the summer.  I thought that was kinda cool.  Bridalveil Falls was really pretty. 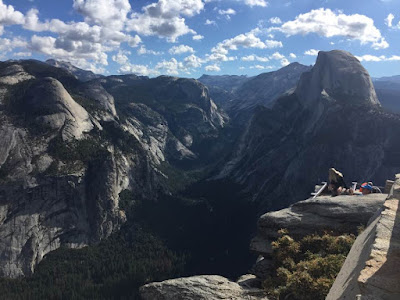 This photo was taken at Glacier Point. I was disappointed when we got there that there was no glacier  to be seen.  Apparently a long time ago there was one which carved out the landscape we see today.  Here you can see Half Dome which is one of the most popular 12 hour hikes in the park.  You have to get a permit the day before to climb it.  It's his dream to climb it one day.  Finley now plans to climb it. 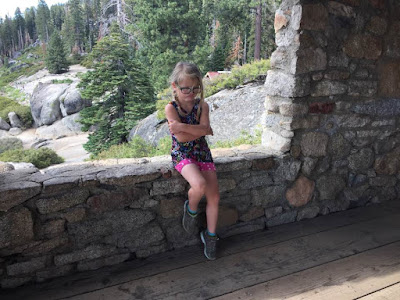 Penelope doing some more pouting.  She is so funny when she pouts haha. 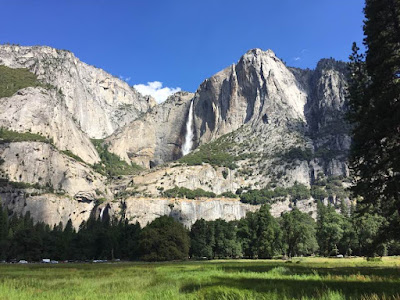 Eventually the park got too busy so we found a parking lot to park in and saw this amazing backdrop.  We then hopped the shuttle to get to other view points more easily.  What we didn't know was that the Yosemite Valley is super tiny and only about 2 miles round so we easily could have biked around because we stayed on the bus all way around the valley and ended up at the Village which is essentially across the street. 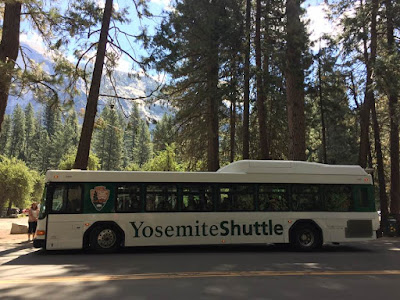 The Yosemite Shuttle which is really recommended to take here at the park because there is no parking.  It is air conditioned which is fantastic since it is really hot here.  At least it was when we were there. 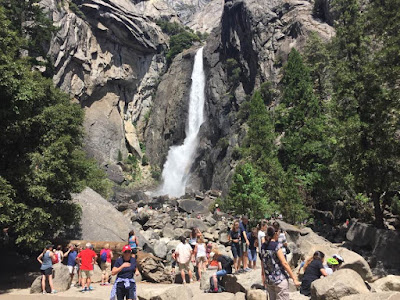 We left the village and walked over to Yosemite Falls.  It was super busy but we took the less busy route there and the short super busy way back.  The water fall was pretty epic.  And very gushy.  We loved it. 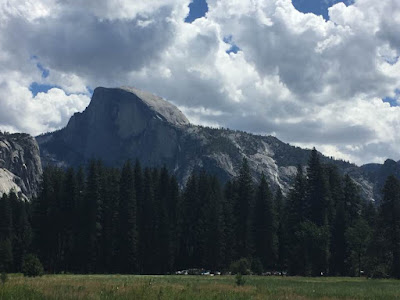 A better view of Half Dome as we walked back to our car.  Next time you are in Yosemite Valley either ride your bike or take the bus.  You will thank me later. 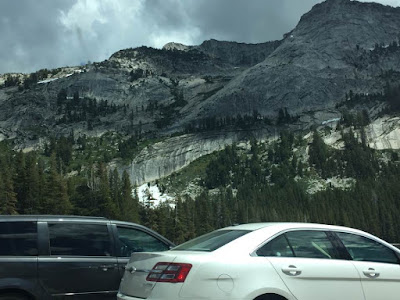 Some snow as we left the valley and got further up.  It was like 15 degrees cooler too.  It was crazy different from what you saw in the valley.  Miles and miles of Alpine Meadows which is Greg's favourite. 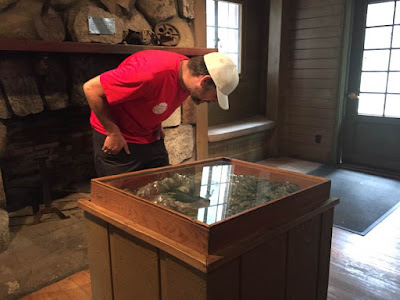 Greg looking at the map and seeing how big the park is outside of the valley.  He was pretty pumped to be here even if he didn't get that much hiking in.  Or any for that matter. 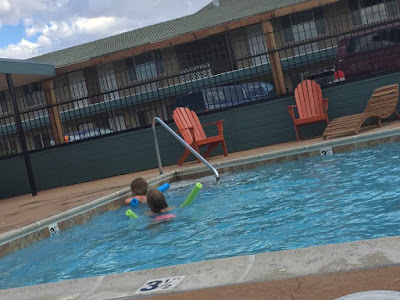 After we left Yosemeite, we drove a few hours to Hawthorne, Nevada which is essentially the middle of freaking no where.  But at least it had a pool considering it was still like 38 degrees.  The girls loved having the pool. 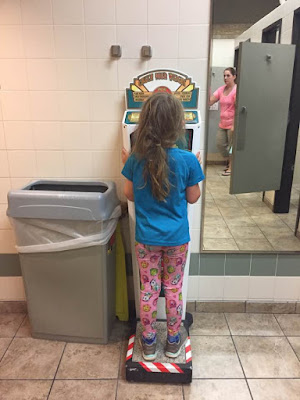 The next day we started our long journey back home.  We found this weight slot machine in a bathroom somewhere else in Nevada.  Penelope thought it was awesome. 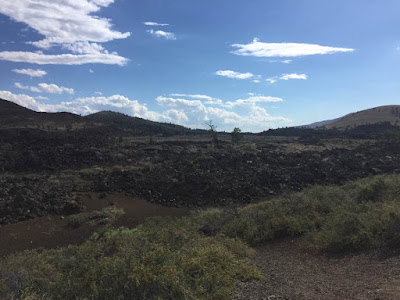 We drove to Dillan, Montana on that day and stopped at Craters Of The Moon which is basically a volcano that erupted but now that volcano shifted to be underneath Yellowstone or something like that.  It was incredibly boring and just a bunch of black cinder.  I don't recommend coming here not that you would since it is seriously in the middle of absolutely nowhere!!

The next morning, we woke up and headed back to Calgary and we were all so excited to finally get home.  14 days was a long time to be away and we were happy to be home and to be with Pizza and Luci!  It was a great vacation though and so many great memories made.
at August 10, 2017
Email ThisBlogThis!Share to TwitterShare to FacebookShare to Pinterest
Labels: Camping, Hike With Kids, Outdoors, Summer 17, Summer Bucket List, Travel, Travel With Kids