1.  So you may or may not know that I am completely obsessed with Fixer Upper on HGTV and everything Magnolia related.  I dream about a shiplap wall in my bedroom most days and I drive Greg crazy with all my fixer upper talk.  I have seen every single episode at least 2x and am dying for season 5 to come out.  Joanna Gaines uses a very similar stool and chair in a lot of her homes and even in her own home so I have been dying to get my hands on similar ones but wasn't sure where to find them or even how to search for them online.  Randomly one day in August, I received a catalogue in the mail for Structube, a furniture store based in Montreal but that had opened up stores here within the last few years.  They didn't have this stool in the catalogue but looking on their website brought me to the stools I had been coveting forever and they had them in black, grey and white.  So I immediately ordered 2 stools at $40 each. It was $90 to ship to my house or free to the store so I obviously shipped to the Structube location on 130th.  I ordered the items on August 25th and they shipped on Septmber 2nd.  I wasn't too happy that it took a week to get my stools ready to ship but whatevs.  The shipping email I got on September 2nd said it would get here on September 12th.  On September 14th, I called the customer service line where they explained to me that Montreal is on the east coast you know and that is really just a guestimate as to when it would arrive but most likely it wouldn't be in Calgary until the end of the following week.  I was annoyed that the email said it would be here on the 12th and now they were saying the 22nd at the latest but I was the most annoyed at the fact that he thought it be necessary to explain to me where Montreal was, like I was some uneducated person from Alberta.  I have never been insulted by a business like that in my life.  Anyways, on Wednesday September 20th, I finally was able to pick up my stools. 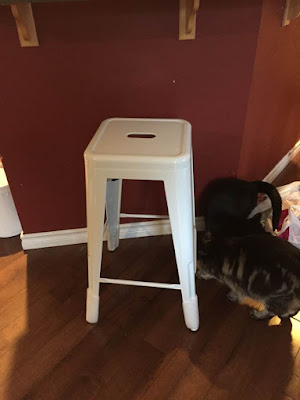 And they are perfect.  They are everything I dreamed they would be and were worth waiting the month to get them.  These stools make me so happy, you have no idea.  And I wouldn't have been upset at them taking a month had that been what I was told when I ordered them but they told me to a week to get ready to ship and a week to get here.  To put it in perspective, I ordered items from California and Texas during a hurricane after I ordered these and they arrived within a week of ordering - and from another country no less!!  I don't think I would ever order or buy anything from Structube again but never say never right??

2.  I have been wanting a new chair for our ugly kitchen built in desk for ever but I didn't want a traditional desk chair but every chair I purchased form a store was too high or too low or had arms and I couldn't push it under the desk which is a requirement.  I was at jysk one day looking at something else when this chair caught my eye.  It was the chairs that Joanna Gaines has in her home in Waco (but in black) and the one she uses when staging the homes.  I was pumped.  The only one they had left was the one that was on display and they let me purchase it.  I really really love it in black but I wasn't sure the black would work in my kitchen space. 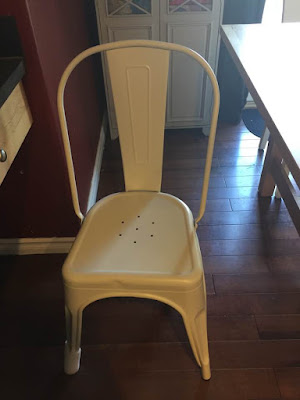 This chair claims to be "white" but it is definitely not as white as my stools or kitchen chairs but it will do because I love it so much.  All i need is new cupboards and walls and my kitchen would be complete hahaha.

3. My breakfast obsession these days is definitely my breakfast maker from Tupperware.  It is hands down the best $24 I have probably ever spent.  I can make poached eggs with 3 tbsp of water in 75 seconds, scrambled eggs in 75 seconds and eggs for egg salad sandwiches in 90 seconds.  I have heard you can make french toast and brownies as well but I have not tried it yet for those items. 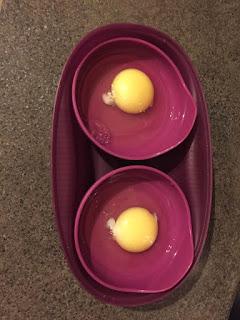 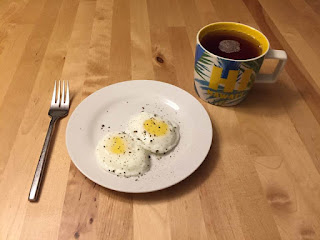 My breakfast and lunch almost always consists of eggs using my breakfast maker.  I highly recommend you invest in one if you want easy breakfasts in no time.

4.  My other breakfast favourite is my pampered chef brownie pan.  I have only ever used it for brownies once but have used it for omelettes a million times as well as turkey sliders, mini pizzas and protein pancakes.   I make 12 mini omelettes for the week and keep them in my fridge.  They are great for breakfast, lunch and snacks.  Penelope also loves eating omelettes too once in awhile for breakfast so she loves these. 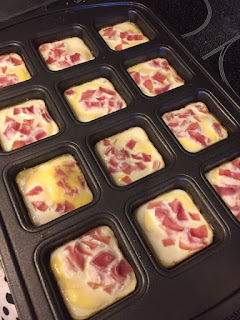 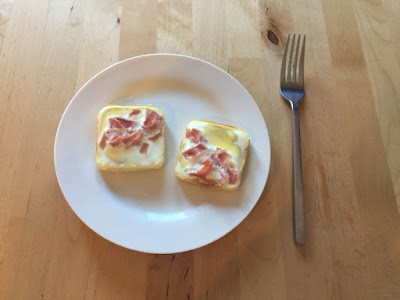 Easy peasy breakfast or lunch warmed up for 30 seconds after the initial baking of them.

5.  We carpool with a girl on Finley's soccer team and one day she had wafer cookies for her snack and shared with the girls and they loved them.  They all laughed when I told them that I used to eat those all the time when I was little.  You can get them at Sobeys for $1 per package and they come in vanilla, chocolate, and strawberry.  Nobody likes the chocolate so I only buy the two below.  For my breakfast in bed on my birthday, the girls and Greg made me a smoothie with 5 strawberry wafer cookies haha.  It was delicious.! 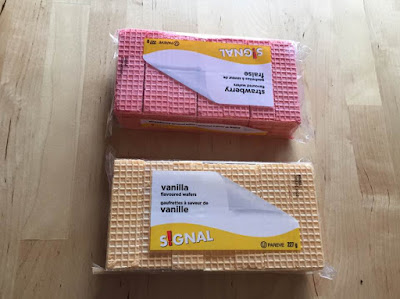 Now when I buy them and the girls see them in their lunch bag they get super excited!!
at September 22, 2017
Email ThisBlogThis!Share to TwitterShare to FacebookShare to Pinterest
Labels: Friday Favorites