This year, the girls participated in the Fall Cup with our soccer club for their first time.  I had no idea that fall cup even existed until recently but it is only open for U9 and up and the rule is that you can't enter new teams only teams that existed in the outdoor spring/summer league earlier that year.  If you follow our soccer journey, you might be wondering how Penelope ended up playing since she was on a U8 team.  Well, Finley's team only had 7 out of 14 players participating in fall cup so SWU recruited some U8 players to fill out the team and well, they ended up recruiting too many.  We had 17 players on our team which is a lot for soccer, but we only had a full team once so I guess it kinda all worked out. 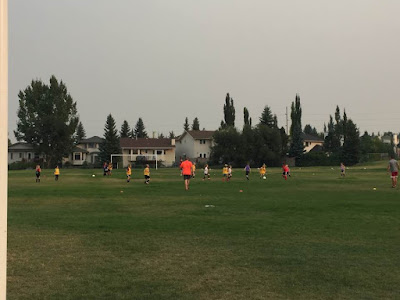 We started practicing on August 30th which was hot and smoky.  It was really gross actually.  By the end of the first and second practices, the smoke was like a thick fog all around us and the sun was this crazy orange and it was sweltering hot.  I didn't enjoy it but not one kid complained about it so that is good.  Thankfully, this forest fire haze broke within a week and it was good conditions the rest of the way. 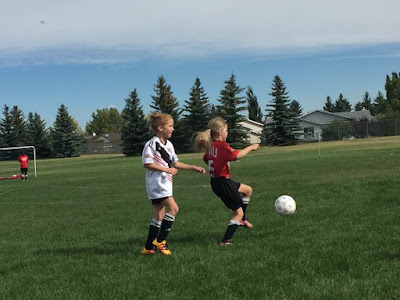 We had a bit of a problem with getting Penelope on a team.  Because both her and Finley were playing on the U9 team, they didn't realize that they were sisters and that there should have been 2 florizones on the team and so Penelope got cut.  It took a lot of persistence on my part to get her put on a team but finally one of the technical directors got back to me and got her on FInley's team.  He has been one of my favorites with SWU for many years. 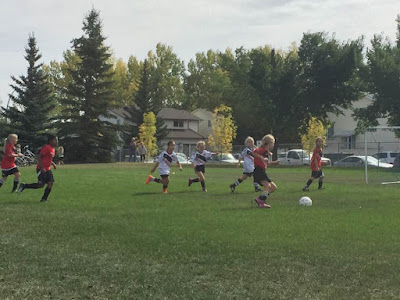 A week into the Fall Cup season, SWU held a mandatory in-house tournament which was all SWU teams from U8 - U12 competing and maybe even more age groups, I don't know.  This team though was their spring/summer teams so the girls were on competing teams and as luck would have it, they played each other the first game.  To nobody's surprise, Finley's team destroyed Penelope's team easily but in the second game, Penelope's team beat one of the U10 C teams which was really good for them.  Finley's team also won their second game easily too. 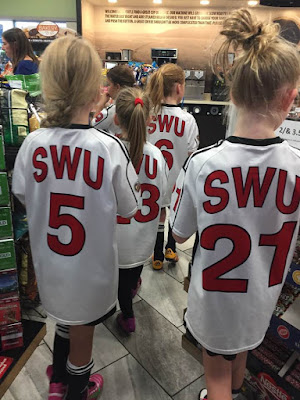 On one Saturday when Greg was out hiking, we headed to our game at 10am nearby in Millrise.  We got there and game time approached and there was no opposing team.  This was strange because we were playing a Foothills team and they are always diligent about arriving 30 minutes prior to warm up and stuff.  Our coach finally got a hold of someone at SWU who told us that our game had been rescheduled to 130pm due to the AGM that was held that morning at the same time.  Some how SWU and/or CMSA managed to let the other team know but not us that the time had been changed.  We were all a little frustrated but understood that mistakes happen.  So the girls and I went home and made the short drive back for the 130 game.  I even confirmed with the SWU field coordinator that we were playing at 130 at the same field.  130 comes and still no foothills team.  We waited a bit longer and still  nothing and nobody.  Not even a referee.  So frustrated, we all left and headed to the nearby mac's for slurpees where we found out that the game was actually at 330 so not only did they not tell us the game was changed, they then proceeded to tell us the wrong time for the game.  We didn't have enough players for a 330 game and many parents were annoyed that their entire saturday had been basically wasted so we ended up forfeiting the game which really sucks given we only have 5 or 6 games in the fall season. 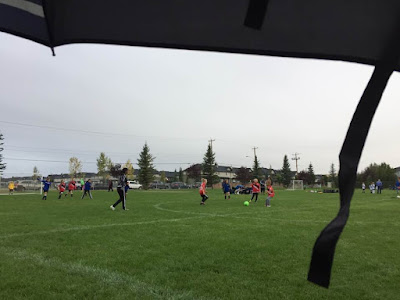 Because of the pool we were in, we had games on two consecutive Tuesdays in Tuscany and in Airdrie - which sucks for commuting given that we are located in the deep south.  On the one Tuesday, we left our house in Calgary where it was  hot and sunny and drove to Airdrie where it was cold and starting to rain.  Very few parents were prepared for this rapid change in weather and all the girls were sharing jackets and sweaters and even greg gave up his jacket so the girls could keep warm.  Finley had her SWU hoodie so she was good but Penelope had nothing.  I only had a hoody which I gave Penelope to wear on the bench and then a light fall jacket.  Thankfully Greg's dad came to the game and had brought umbrellas and extra jackets for us to keep warm.  The first time we played at this same field in Airdrie in June, the weather was even worse.  We as a team have collectively decided that we don't ever want to play here again! 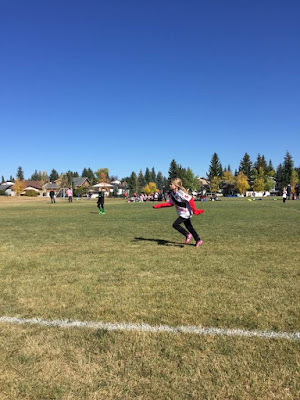 Because we had 17 players on the team and only 7 had ever played 7 on 7 and on such a large field, it was definitely a learning season for the girls.  The 10 U8 players learned a lot about positioning and soon found their favourite positions to play.  And the other 7 girls who normally play the same positions each game in U9 got to play positions that they normally don't get to play.   All of this helped tremendously for their development which is really good. 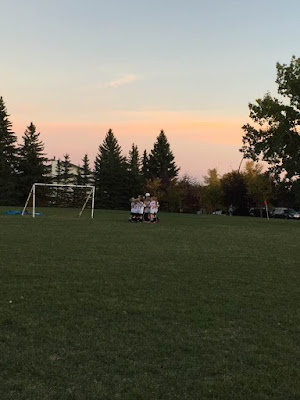 Our season ended last Wednesday and even though we went the whole season defeated, it was really great to watch these girls really develop both individually and as a team.  Had we a few more games, we easily could have won a game or two.  We did have some really close games which showed how far our girls have come.  This past weekend, the Fall Cup finals were held which were the top 2 teams in both pools in the U9 girls division and we were not one of those 4 teams so we did not participate in that.  And with the closing of one season, comes evaluations for the next.  As you read this on Tuesday, both girls have already participated in 2 evaluations.  This was Penelope's first time evaluating as we bumped her up to U9 a year early and I was really nervous about it but it seems to be going well.  We should find by the end of this week or sometime  next week where they end up.

at October 03, 2017
Email ThisBlogThis!Share to TwitterShare to FacebookShare to Pinterest
Labels: SWU Soccer