Drawing inspiration can come from so many different people and things.  When I first started running 4 years ago, I was inspired to do something different, something just for me.  I had spent the previous  5 years prior being pregnant 3x and undergoing 3 c-sections and I felt that I deserved to do something   that was mostly only for me and running was that thing.  I had no idea that running would come such a integral part of my life, open so many doors for me and introduce me to so many more people who inspire me each and every day.

This past Sunday, Shalane Flanagan of the United States won the TCS NYC Marathon.  She was the first american woman to win this race in 40 years which was pretty cool.  There were also 4 american women that finished in the top 10 which apparently is a big deal. 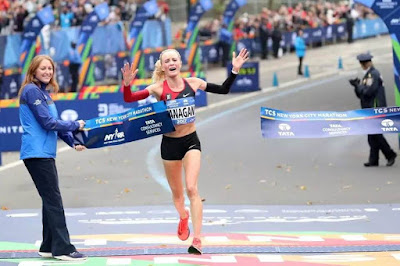 Watching her cross the finish line first was incredible.  She raised her arms and broke through the ribbon and was screaming f*ck yeah.  She was full of emotion as was everybody watching on some form of technology and those lucky enough to be there.  My social media was soon filled with photos and brilliants words about her win and rightfully so.  It was definitely inspiring to watch her cross that finish line first and got me thinking about my first marathon that I would like to run.  Once I realized I loved to run, I wanted to run a full marathon before my 40th birthday or at least before the end of that calendar year.  But I realized quite recently that my 40th year was creeping up on me pretty quickly so I best be getting my butt in gear hahah. 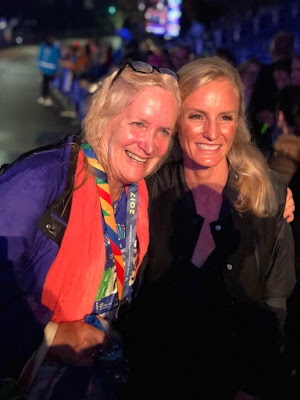 However, what I found to be most inspiring was how she, along with all of the other elite runners came back later that night to cheer on and hand out medals to those absolutely incredible runners who were still out there giving it their all well into the late, rainy + cold evening.  At that point, I got to thinking about inspiration and inspiring others and being inspired and what that all really meant.  I mean, to me as an average at best runner, who was more inspirational: Shalane Flanagan who is one of the elite runners in the world or random people, whom I could probably more likely relate to, finishing up 6 hours or more later? The answer is that there is no real right answer.  I don't think you get to pick and choose what inspires you to do more, be more.  I think it is just a feeling that you have no control over.  It just happens.  Kinda like love.

I know I annoy the shit out of people when i post my runs and workouts on social media.  I mostly try to limit it to Instagram and post them to Facebook not as often.  But the god for sake truth is that nothing motivates or inspires or pushes me more then seeing other people posting their runs - good or bad, long or short, fast or slow - on social media because sometimes you need that extra oomph to get you started.  So to all of my friends, please don't stop posting because some days I need to see it.  Like today as I am writing this....hahahaha. And my hope is that perhaps my posts do the same to others and if i can convince one person out of all my friends and followers to go be active then it works.

Many people I know share instagram accounts of people who inspire and motivate them.  I instantly will follow all of them and then gradually unfollow all of them and here is why.  I can't stand anybody who's instagram account looks like straight out of martha stewart (sorry I can't think of a better analogy at the moment).  I need to follow real people who struggle at working out some days, who like to eat chocolate or a bag of chips or a glass or 6 of wine.  I need to see the good workouts, the bad workouts and everything in between.  I like balance and I like realness.  I post about my crappy runs and terrible races (like this most recent bad race haha) on the blog and social media because I know not every race is great and I think people need to see that.  Or at least I do.

I was going to write about a few people who inspire me daily but my list was getting crazy long.  Maybe in the new year, I will start an interview post where I send some of my favourite runners a series of questions that they have to answer and I will post them on here.  But in the meantime, you can go search the list of people that I follow on Instagram and be inspired by all the amazing things they do.

I will write though, about my greatest inspirations and probably the two people that are inspired most by me.  Although it didn't start out this way, it has certainly evolved to become this.  When I started running, i had no idea the kind of impact that I would have on my kids.  I never really thought about it to be honest.  I was doing it for me and nobody else.   But soon, I saw the girls stretching and doing yoga and rolling out their calves and it bands and realized how much they pick up from both me + Greg.  We are both active people and you can really see that in our girls.  They like biking, running, yoga, bootcamp, camping, backpacking - all things they have grown up watching us do.  They watch so intently and pick up on everything.  I honestly think that if Penelope's soccer career doesn't pan out, she is going to be a physiotherapist at Liv Active because she loves it so much there. 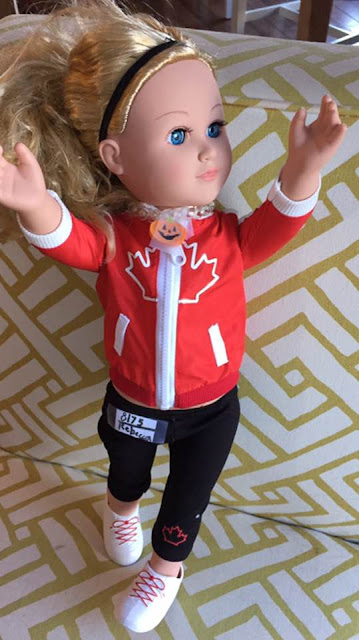 Finley bought this doll with some birthday money she had.  She loved that it represented Canada and was decked out in running shoes and "lululemon" clothes.  She even drew the lululemon logo on a piece of paper and taped it to the back of the pants.  The pumpkin eraser she is wearing is a medal she won running a marathon all around our house.  She is also wearing a race bib and her name is Rebecca.  Greg and I asked her why she named her Rebecca and Finley said because she wears lululemon clothing and likes to run and live a healthy lifestyle.  This made my heart happy more then you could possibly know.  Not because she named her Rebecca either.  She could have picked any name she wanted but it was the reason why she did it and wanted this doll in the first place.    These 2 girls are my biggest supporters and are always eagerly waiting to find out how I did and to see my medal.  They have pictures drawn of me winning races and they all hang downstairs in my workout area as a way to inspire me on those days that I am lacking the motivation to do anything.   It is amazing how something I started because it was just about me is now as much about them as it is about me.  In the end, my ultimate goal is to be as healthy and active as I can so I can be around when I am old and watch my grandchildren grow up.

One day soon I will reach my goal of running 42.2km and I know that when I do, these girls will be my biggest cheerleaders and inspirers!