We kicked off Halloween with the carving of our pumpkins on Monday night.  Greg is usually the official pumpkin carver but the girls have really taken over this year. 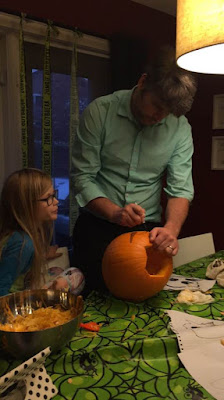 Finley designed her pumpkin after her rainbow poop emoji pillow and then added a unicorn horn to it.  Greg did the drawing of Finley's design on her pumpkin and got the carving started and then Finley did the rest.  She did cut in a few spots where she shouldn't have but it still turned out good. 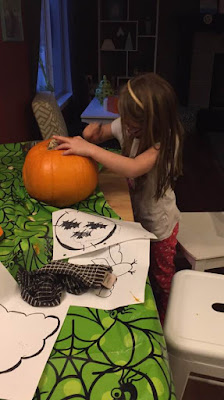 Penelope was going for bats and moons and it took a few designs before Greg gave her the ok to use on her pumpkin.  Penelope didn't quite understand that you had to have a bunch attached so that it doesn't fall through and all that stuff.  She emptied the entire pumpkin and did all the carving for the first time ever.  She was quite proud of herself as we were.  Greg supervised the pumpkin carving and did the clean up.  We don't roast the pumpkin seeds so it is relatively easy to do. 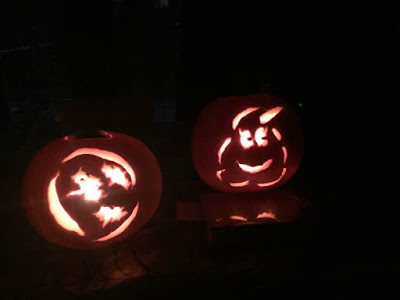 Our pumpkins!!  They turned out so awesome!! 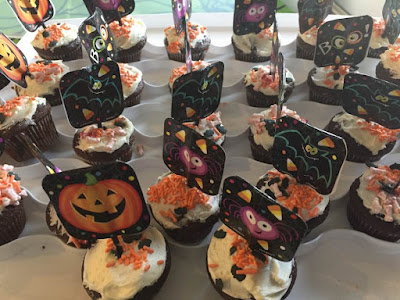 Finley's class was having a halloween party and we were asked to bring cupcakes or cookies so we combined her birthday treats with her halloween treats and they turned out great! 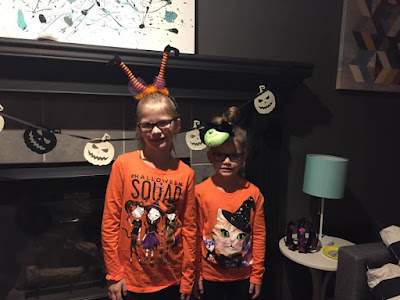 We don't get to wear costumes to school.  They have orange and black day and this year, they combined it with crazy hair day.  I bought the kids shirts at The Children's Place in August (ridiculous right??) and the headband was from a previous year and found in our halloween bin.  We have witches outside on our lights on the garage but during one of the wind storms, one of our witches lost their body so I took the head and tied it into her hair.  They kids liked it so I guess that is what counts haha.

When I was growing up, my mom always made hot dogs for supper on Halloween and it is a tradition that I have carried forward with my family too.  My kids don't care for hot dogs outside of camping but they never complain on halloween about eating them.  Instead of getting ready to go trick or treating though, we had get in the car and battle rush hour traffic to get to heritage train station because douchebag someone left a suspicious package at Southland train station so they shut it down + had like 2 shuttle busses operating to get passengers to the next stop. While Greg was waiting in the save on foods parking, he ran into one of our friends and we gave him a ride back to his car too.  What a chaotic mess!! 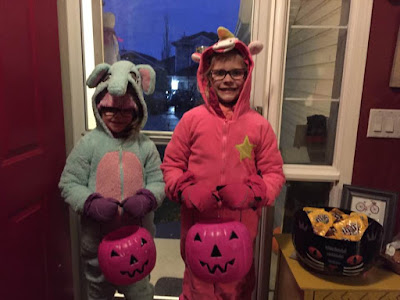 We normally start trick or treating around 6pm and by we, I mean Greg and the girls hahah.  But this year, thanks to the train station mess, they didn't get outside until 645pm.  Rainy weather has to be the worst of all weather conditions to trick or treat in because getting wet and then cold sucks.  The girls had fleece layers and rain jackets underneath their costumes.  I am thankful that we didn't go to the homemade cardboard route this year like we had planned earlier.  These costumes came in handy in this weather. 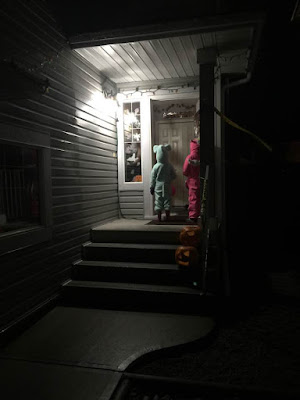 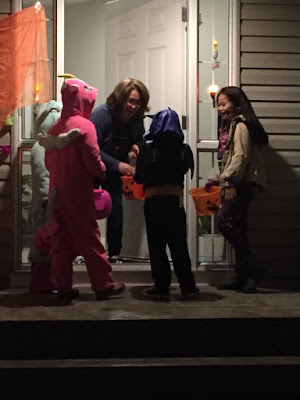 Greg and the girls ran into some of Finley's friends on the street and they trick or treated for awhile together.  One of the dad's was with them and he said in the Philippines where he is from, Halloween was a religious holiday spent in graveyards and it wasn't until the late 90s that they adopted the more westernized version of the holiday.  The more you know right? 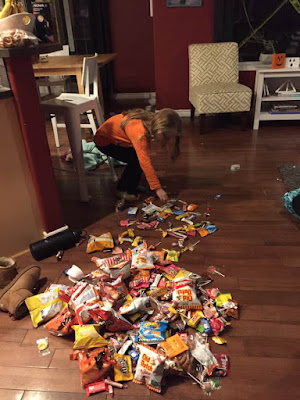 Greg and the girls came home and Penelope decided she was done.  She lasted about an hour and 15 which is what she normally does.  As much as she loves candy, she does not like trick or treating.  She much prefers handing out candy instead. 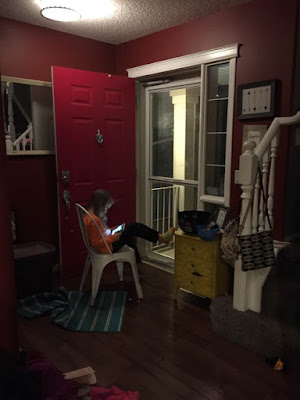 Which is what she did after she was done.  She had her iPad to keep her busy between kids. 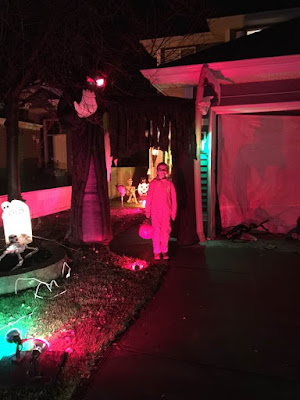 Greg and Finley went out for another 45 minutes before heading home.  Finley loved this scary house she came across. 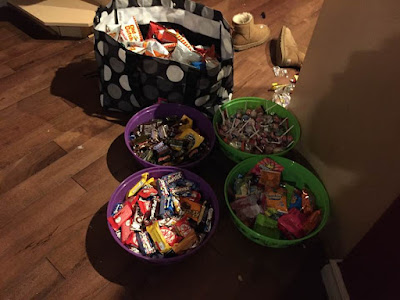 All their candy sorted plus our leftover candy.  This is the first year that we have ever had left over candy in the nearly 10 years we have been here.  The weather played a role as did the fact that we didn't get home to hand out candy until 645 which is later then usual.  No idea what we are going to do with this all.....I use the m+m's + smarties to bake with but that is still a lot of candy.  And the chips!!  So many chips.  I remember when I was their age and getting chips on Halloween was such a treat and now it's like all those kids who were excited by the chips are now adults and are buying chips to give out haha.  We did get two nutrigrain bars haha but that was as "unusual" as our candy got.  While I did snack on Mars bars in-between trick or treaters, I only ate one sucker and one oh henry bar while I helped Penelope sort all of the candy - not too bad haha.  We will see how I do today!

Hope you guys had a safe and happy Halloween!

at November 01, 2017
Email ThisBlogThis!Share to TwitterShare to FacebookShare to Pinterest
Labels: Halloween