Last Friday (December 8th), Greg had the day off from work so we pulled the kids out of school for the day and headed to the mountains for some XC skiing.  With soccer consuming all of our weekends, we don`t get out of the city as often as we would like.  Like the previous weekend, we didn`t hit any snow until we got about 15km past banff but unlike last weekend, it was much colder.  And much colder then it was in Calgary! 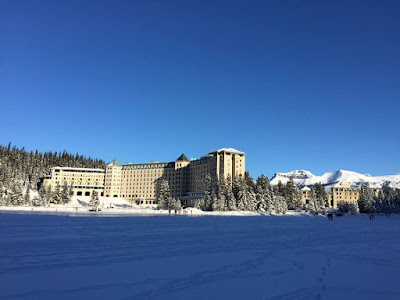 Despite being so cold, it was definitely a beautiful sight to see and get to be outside and ski around it.  There wasn`t a cloud to be seen and the blueness of the sky was impossible to capture with my iPhone. 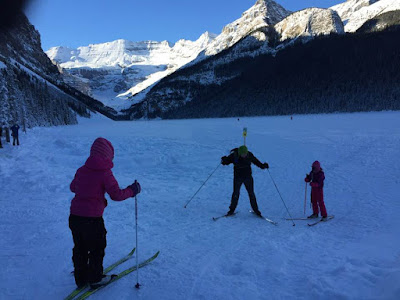 This week, the actual lake at Lake Louise was finally frozen over so that is where we decided to ski.  There were a lot of people there but the further we got out onto the lake, the less people were around outside fellow xc skiers. 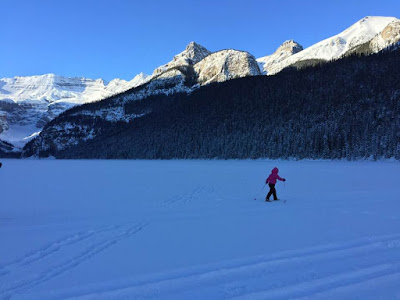 Both kids were much more confident on the skis this time around but unfortunately one child was not happy to be slower then her sister and not leading the pack.  Penelope was flying that day. 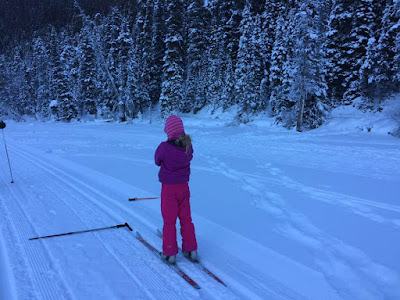 Finley had a solid temper tantrum about being behind Greg and Penelope.  She threw the skis and pouted before declaring that she didn`t need the poles to get to the end of the lake and took off so she could be in the lead. 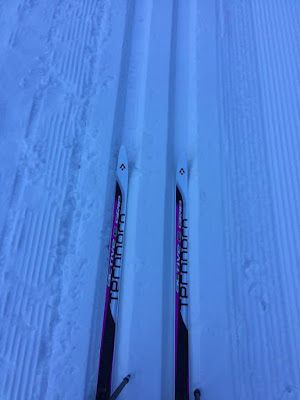 I was excited to finally have my skis after the big problem with my first set of skis.  These ones were much prettier then the original ones I got.  It's hard to tell in this photo but they are black, white and a purplish pink colour.  I also skied in the tracks this time because the snow on the lake was really hard and I found this to be easier.  I also discovered that fresh snow is soooooo much better then hard packed down snow.   The first time we went, my ski boots really rubbed on my left ankle and was starting to rub on my right ankle when we finished but by skiing in the tracks you used your stabilizers and your hips a lot more and there was no rubbing.  Perhaps I will have to ski in the tracks going forward to prevent the rubbing. 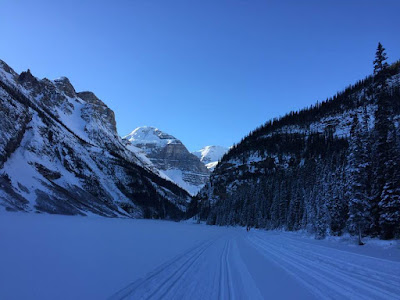 I don't know if you could have picked a more perfect day to skip all of our responsibilities and breathe this all in.  Granted, it could have been a lot warmer but thankfully, it did warm up as we skied so that was a nice treat haha. 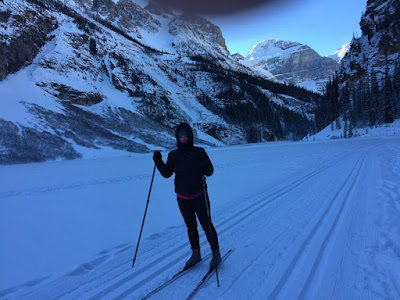 While Finley + I waited for Greg and Penelope to catch up with us, I got Finley to take a photo of me so there was actual proof that I too am xc skiing. 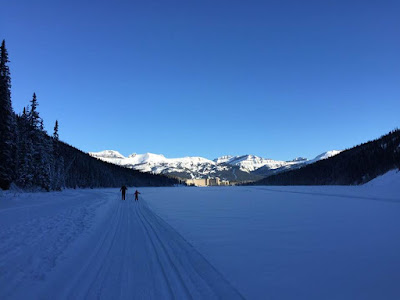 Greg + Penelope catching up to us.  We didn't go all the way to the edge because there were mini avalanches all around us and the risk is much higher on the one side of the lake. 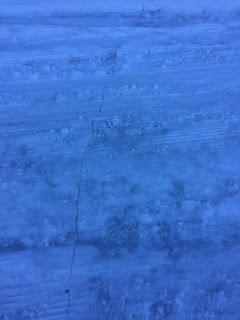 On the way back to the lakefront, Finley finally noticed the cracks in the ice.  There were lots on our way here and our way back but this was the only one she noticed which was a good thing because she was really panicked.  A few years ago we were snowshoeing across Lake Minnewanka and I came across a crack in the ice and I also freaked out.  Brad +  Greg both said it was nothing to worry about and even though I worried about it until we got off the ice, it turns out they were right.

We ended up skiing around 5km that day.  A lot of people either don't care or don't know that you aren't supposed to walk through the ski tracks because there were a lot tracks walked through and some sections had turned to ice and it was crazy dangerous.  While the views are spectacular skiing here, Greg and I both felt that this was a once a season kinda thing to do.  We stopped at Starbucks in Banfff before heading back to Calgary where it was 30 degrees warmer then what it was in Lake Louise.  Isn't that insane?
at December 18, 2017
Email ThisBlogThis!Share to TwitterShare to FacebookShare to Pinterest
Labels: Banff National Park, Lake Louise, Outdoors, Winter, XC Skiing