We have come to really enjoy cross country skiing but don't really have the time to drive out to Banff and back to get it done with soccer consuming all of our weekends now until mid March so we were excited to see that you can go skiing at local golf courses around the city. 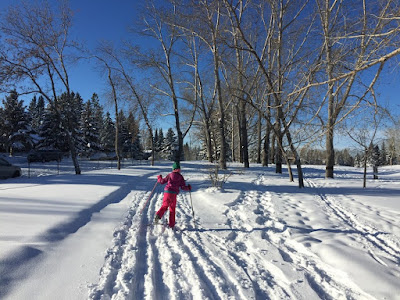 On New Years Day, we headed to Maple Ridge Golf Course in the southeast part of the city.  The girls had been here 2x already and Greg comes here often in the evening to ski with his buddy so it was only a new experience for me haha. The thing I like most about cross country skiing is that it is flat.  Or at least it is supposed to be.  I mean, if I wanted to ski up and down a hill, wouldn't I do downhill skiing??  This xcs trail had a bunch of hills which is why I had avoided it thus far. 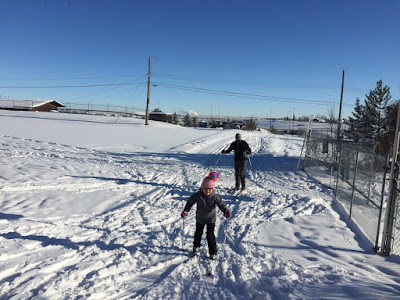 We did just under 5k of skiing but you can go longer or shorter depending on what you want to do.  When we started we immediately had to go up a hill which annoyed me but I figured it out eventually how to get up it.  It remained flat for awhile but then we encountered a huge hill (imo) where both girls went down it without a second thought.  I on the other hand, panicked about getting hurt or something so I took my skis off and walked down it haha. 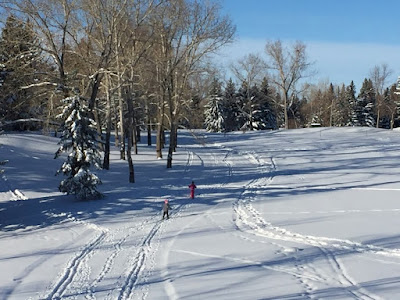 This was the girls after they got down the big hill while I debated what to do hahah.  After I walked down to the bottom of the hill, I put my skis back on and skied on.  Eventually I caught up with Greg and the girls as they waited for me on the top of another hill.  This time, there were 2 options: the big (imo) hill that they were going down, or a flat way around.  I chose the flat way around but it wasn't really flat and there was a hill I had to go down which did not make me happy.  I panicked big time but eventually made it down as slow as i could go.  I hate that I gain momentum when going down the hill but can't yet figure out how to go down slowly haha.  This put me in the lead with Finley close behind. We did come to yet another hill and I went down without even thinking about it haha and survived.  Greg and the girls were proud haha. 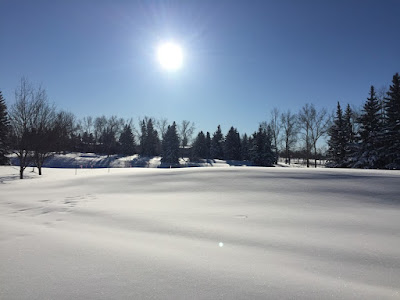 After being in a deep freeze for what felt like forever, it finally warmed up enough for us to get outside and not freeze to death. We went just before lunch and although it was still - 15 outside when we started, it felt like summer compared to what we had had previously.  We only encountered 2 other skiers while we were out but when we were getting our skies off it was getting really busy and it had warmed up substantially. I think the entire city of Calgary had cabin fever after the cold spell haha.  Apparently it was the coldest we had been since March 2, 2014 which incidentally was/is Greg's birthday. 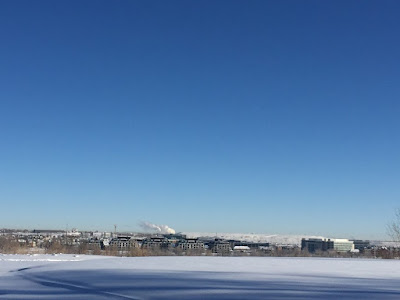 Greg + Penelope took a short cut back to the car while Finley and I continued on.  We didn't go the same way that they went last time to avoid even bigger hills apparently which made me happy.  It was cool to be skiing alongside Deerfoot but I didn't like the noise that came from it.  You could hear it before you could see it and it took away from the peacefulness that you had prior.  It was around here that I wiped out hard.  Finley called it a surprise fall because usually you have a feel if you are going to fall but I had nothing.  I fell hard and fast and had no idea how or why it happened.  I hurt and it was a painful ski back to the finish.  Thankfully it wasn't anything serious and didn't last too long.

It was a fun few hours skiing within the city especially since it was finally nice out.  We were there this past weekend too with some friends and it was really icy out and I didn't really enjoy myself. I fell lots, I lost control so many times and once I crashed into Jack who was pulling Helene!  Thank god Jack knows what he is doing haha 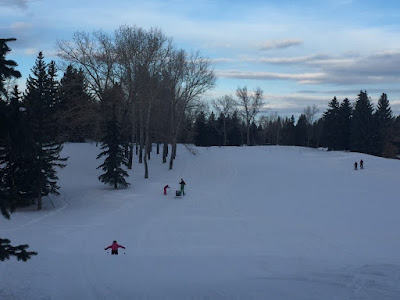 If you are into xc skiing and are looking for a place to ski in the south, definitely check it out.  It is free and open 24 hours a day but there is no lights but if you have a headlight it does the trick.  I have never gone after dark but Greg claims the lights from deerfoot help a lot.
at January 09, 2018
Email ThisBlogThis!Share to TwitterShare to FacebookShare to Pinterest
Labels: Calgary, Explore Calgary, Explore YYC, Outdoors, Winter, XC Skiing, YYC