We are huge Olympic lovers in our house.  We pvr all the coverage overnight when it is live and then watch it in the evening. A few mornings, Greg and Finley were up early watching live medal events before getting ready for school and work. 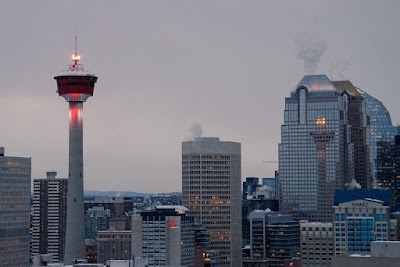 One of my favorite things about the Olympics is how they light they flame on the Calgary Tower between 6 + 7pm everytime we won a gold medal.  It was lit a lot during the 16 days of the games.  While I never made it downtown to actually see the flame lit myself, I do appreciate all the photos shared on social media, like this one, showing it off.  The first night they did this, the Fire Dept was inundated with calls that the tower was on fire haha. 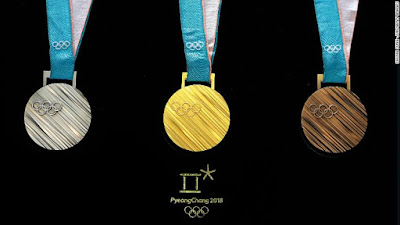 I absolutely loved the medals this year.  They were so cool and modern looking.  I never remember the medal from one games to the next, so I will just say that this is my favorite medal even if it really isn't haha.

I know a lot of people have a negative view of the games and think everybody and everyone is a sell out and they are too commercialized and too many other complaints that I cannot remember probably because they too are ridiculous. But these athletes do some pretty crazy shit and the risks they take are insane.  One of the ski cross guys broke his pelvis when he collided in the air with another skier.  Another athlete, I think it was a skier, broke her arm in a training run earlier in the day and still went on her final run.  I have no idea if she won a medal or not but seriously, that is dedication to your sport and your country.

It was cool to see Mark McMorris come back and compete after nearly dying a year ago.  One of the first thing he asked when he came to after his accident was if he would be able to compete in PyeongChang.  Kim Boutin won 3 different medals in short track speed skating - only the second female or maybe even person from Canada to do this.  We got to see Scott + Tessa win their second individual olympic gold and fifth medal to become the most decorated olympic figure skaters in history.  Now can they just get married? Hahaha.

Since the four of us are all new cross country skiers, we really enjoyed watching this event this year.  It blows my mind how fast they are at skiing.  These xc skiers are like 3 - 4x faster than me on skis.  Most are able to ski faster then I can run haha.  Finley loved this and now wants to add competing in the winter olympcs for Canada in this sport. She really loved the biathalon too.  Penelope didn't love any of it as much as we did and said she still intends to play for the national soccer team in the summer games.  Now I know that 1% of 1% of athletes actually make it to this level and there is a higher probablity that my kids won't make it to this level then they will but I will never ever discourage them for dreaming that they might.  Instead I encourage them to work hard and maybe one had it will happen.

Congratulations to all of the medal winners, athletes, coaches, trainers for entertaining us these last 16 days and allowing us to come along on your adventures.  And to all the parents, I don't know you do it - I was stressed out immensley watching some of the medal events haha.
at February 26, 2018
Email ThisBlogThis!Share to TwitterShare to FacebookShare to Pinterest
Labels: Olympics