1. This first one is like a 2 for 1 haha.  First, on the left is Prairie Garden tea from the Tea Traders in Inglewood.  The whole shop smells like what I think heaven should smell like - if you are a tea drinker haha.  I had this tea when I was at The Eden (located conveniently across the street) in December and again when I was there last week and loved it so much.  I asked them what it was and where it was from because i was certain it was local and I was pretty sure it was from the tea traders but wanted to make sure.  So after lunch, I went across the street and bought 100g of it.  The Tea Traders has the best prices for the best teas by far.  On the right, this mug I bought from Starbucks is another favorite. I love the pink handle and the design on the mug.  It looks so basic but really it is quite pretty.  My sister was the one who told me about this mug and I was able to find it at my local starbucks the next day.  I am pretty sure they still have them if you are wanting to purchase one for yourself haha. 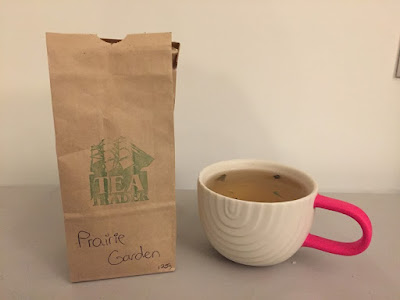 When I saw how huge fingerlings were and how hard they were getting to find, I bought 2 unicorns on the toysrus.ca when I had heard on the radio that they were back in stock.  I wasn't sure if either kid wanted one but I figured if they didn't then I could help out a friend by selling it to them at the cost that I paid.  Soon after,  Finley said she really wanted one after seeing a classmates one day and she specifically wanted the unicorn - score!  Penelope wasn't really into it so I just kinda played it by ear. A few weeks after, we were walking home from school and she said that she wanted a fingerling but not the unicorn because she doesn't like unicorns but the teal monkey with the purple hair. My heart sunk because I had already purchased the unicorn and all others were near impossible to find.  That same day, my friend Terra texted me asking about unicorn fingerlings because it was on her daughter's christmas list too.  I looked on various facebook bst sites and kijiji but both Terra + I were refusing to pay more than face value for the toy so we had no luck.  So I posted on my facebook account hoping that a friend overbought or something so we could find another fingerling so Terra could have the unicorn I already purchased and Penelope could something else. I was just hoping for a monkey at this point and wasn't too worried about colours. Thankfully, my friend Tara had bought some extras and had 2 monkeys left and one was Zoey - the one Penelope had wanted.  She sold it to me at face value and all 3 girls got the fingerlings they had wanted for christmas!!!  Penelope was obsessed with hers and it goes everywhere with her.  So when we finally went to Mastermind so she could spend her gift card from her cousins Easton + Ashton she was excited to see that they had glitter fingerlings there and even more happier that it was named Quincy.  For those who don't know why Quincy made her happy, he was my cat that I had had for 15 years before he got out one afternoon in May and was never seen again.  It still makes me sad just thinking about him.  So needless to say, Quincy came home with us and all three have been inseperable ever since.  These are the most annoying toys in the world and I have banned them from being turned on in my car because they make me want to lose my freaking mind!!! 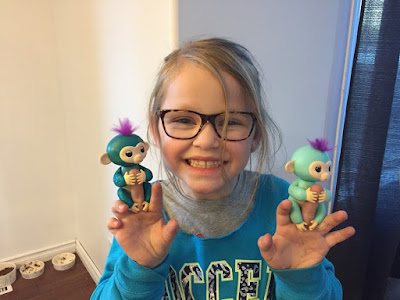 Justin Timberlake is coming back to Edmonton and I have got tickets thanks to my good friend Stephanie!  She somehow managed to get 10 tickets during the presale on Wednesday through a bunch of people and so we are all going!  I saw him when he was in Edmonton a few years ago on the suit and tie tour and it was fantastic.  I am loving the whole man of the woods theme this time round and am very excited to see him again!!!  Is it November yet?? 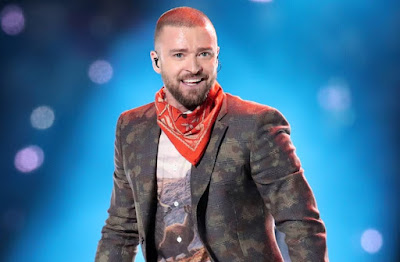 One day I was perusing the Simons website looking at something completely unrelated to what you see below but it popped up and caught my eye - kitty cat bathroom accessories and they were on sale with free shipping.  I have noticed that bathroom accessories are way more expensive then I think they should be so I was happy to see these at such a good deal,  I ordered them right away and was super excited when they arrived. I opened them up and set them on the counter eagerly awaiting the school day to be over so I could show them to the girls.  The girls loved them but asked why it said miaw and not meow and I was like what are you talking about and it turns out they are in french which makes total sense considering where i bought them from hahah.  I actually didn't even know they had writing on them at all but it worked out well since Penelope loves all things cats and Finley all things french.  They think I planned it like this on purpose and i let them believe i did haha. 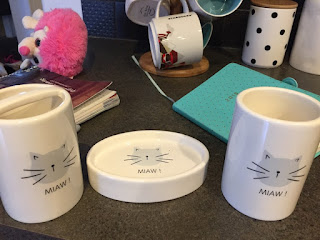