Since we are usually so busy with soccer most weeknights and week day days, the last couple years, Greg and I have gone on lunch dates on Valentines Day instead of dinners.  It seems to work well for us and the menu is normal and it is usually not too busy. This year, Greg booked Market on 17th for our lunch date and I was definitely looking forward to some fun things on their menu.

Market really emphasizes the market cuisine - hence the name - and was the first restaurant in Calgary to have its own internal home garden, the urban cultivator, where they grow more then 16 different varieties of heirloom seeds year round.  They change their menu to culminate with the changing seasons so that everything is fresh and local.  They make their own cheese, cure their own meats and so many other cool little things that make eating here so wonderful. 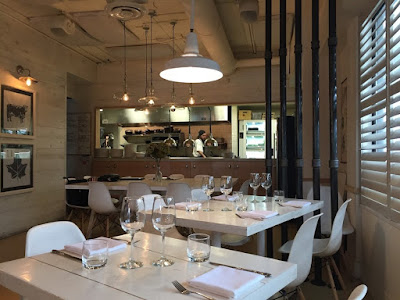 As soon as I walked in, I was in absolute love with the decor and atmosphere.  If you ever watch Fixer Upper, you will recognize a lot of elements in here that Jo would use in a house reno or even in her own restaurant Magnolia Table. I loved the exposed pipes on the roof and the ones in the contrasting black dividing up sections, the eiffel chairs, the white wooden planks for tables, the shiplap on one of the walls.   Seriously, LOVE.  I also love the open kitchen concept where you see all the magic happen and go down. 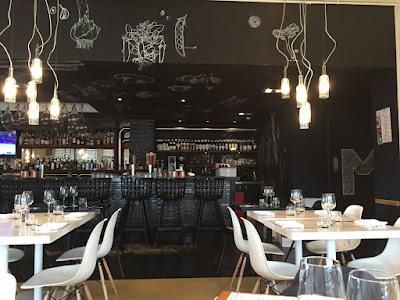 How awesome is the black bar they did to contrast the white dining area????  The boldness they have in this place is phenomenal.  I think this was Greg's favorite part of the place. 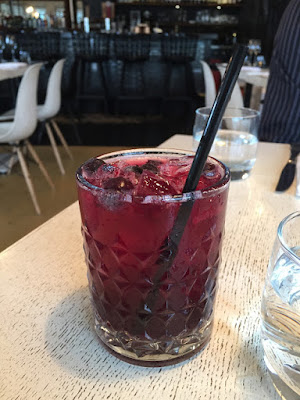 I treated myself to The Edie Sedgwick which was delicious.  It was like drinking juice although sometimes that can be a bad thing haha.  It was Stoli Vodka, St Germain Elderflower, Homemade Blueberry Puree, Fresh Pressed Apple Juice + Soda. I only had one since I had to drive home and pick up the girls and take Penelope to soccer but I could have had many more. 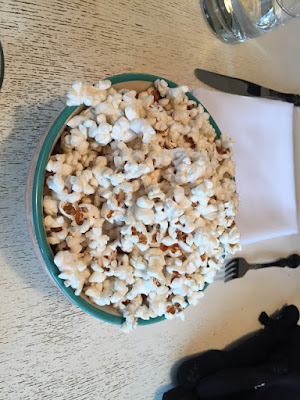 I was really looking forward to two things on their lunch menu and one of them was this popcorn.  It is made on the stove with bacon fat and truffle.  If heaven came in a bowl, this is what it would like.  I loved that it came in a pioneer woman bowl and that all bowls and appetizer plates were different.  So cute and it works really well with their vibe too.  And at $5 a pop, you can have more than one bowl if you choose!! 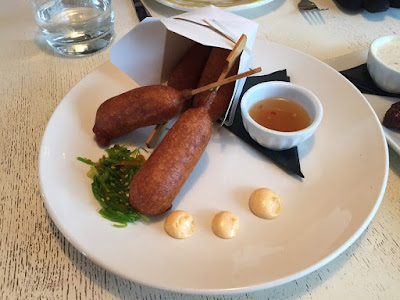 These crab corn dogs were the other thing I was really excited to try when I had glanced through their menu earlier that week.  These were absolutely amazing.  It was basically like a deep fried crab cake but better because it was on a stick!!  The aioli was really good with the corn dog and while both Greg and I enjoyed the flavor and heat of the fish sauce, neither of us thought it worked well with the corn dog.  I absolutely recommend that you try these next time you are here.  You won't be disappointed. 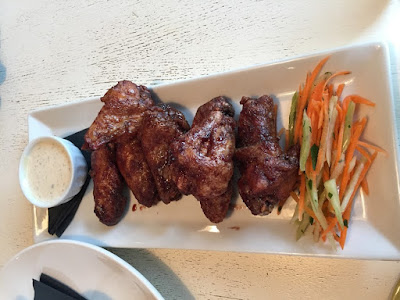 The third thing we got was the Sticky Saskatoon Berry Wings which was Greg's pick.  I don't love saskatoon berries so wasn't sure if I would like these but man were they fantastic.  These are Fried Chicken Wings from Lethrbridge and topped with a sweet and savory saskatoon berry sauce.  I can't believe how good these were, I am drooling just thinking about them now.  And to think I didn't think I would like them haha. 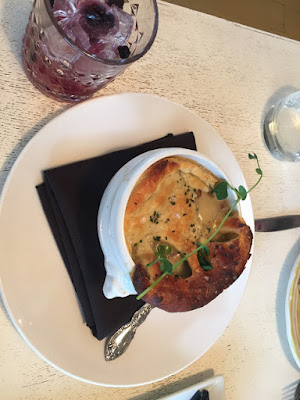 After devouring three starters, we shared the Duck Confit Pot Pie. This consisted of Brome Lake pulled duck confit, tarragon truffle cream and farm fresh peas and carrots.  I didn't like this at all and I was disappointed that I didn't because I really wanted to and I really thought I would.  Greg ate the whole thing and while he didn't love it and probably wouldn't order it again, he said it was ok.  I think it was the tarragon flavor that ruined it for me because I don't think I like tarragon haha. 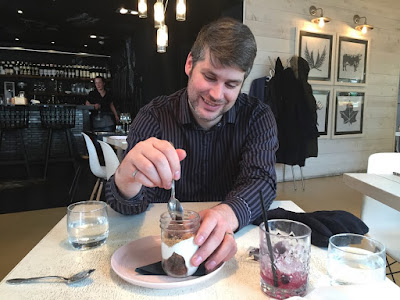 For dessert, we shared the Chef's Feature which was smores in a jar.  It was graham cracker crumbs, delicious brownie and marshmallow fluff.  The brownie was probably one of the best, if not the best, brownies either if us had ever had in our entire lives.  So good.  My only complaint was that while the marshmallow fluff worked perfectly for what they were creating, it was so super sweet that I would have preferred ice cream or something.  But either way, still really good and I would have it again.  It was actually really tough to pick a dessert because they all looked so delicious and that is really hard to come by in a restaurant these days.  They also sell bonbon's so I bought 2 for the girls and one for me for an after school treat and they were freaking delicious.

This was our first time to Market but it definitely won't be our last.  I really want to try their brunch menu and bring the kids because I know Penelope would die for their banana bread french toast topped with chocolate sauce and it all looks amazing.  Plus their dinner menu looks really spectacular too.

They are really easy to find on 17th ave with lots of free parking around the block.  They take reservations which is always fantastic because really who likes waiting for a table??  Not this girl.  Go make your reservation now, you won't regret it.
at February 22, 2018
Email ThisBlogThis!Share to TwitterShare to FacebookShare to Pinterest
Labels: Calgary, CalgaryEats, Local Eats, MARKET Calgary, YYC