Last year Lululemon introduced the Strava 40|80 Challenge where you run either 40 or 80km in a two week period.  It was so ridiculously cold here and since it has to be run outside so the gps can activate it, I didn't run it.  This year, the cold streak snapped the day before the challenge started so I was eager to participate in it this year. 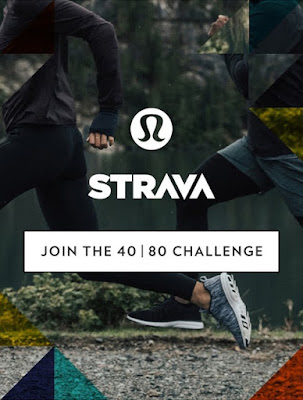 While I would love to run 80km, I have never ever ran that much in a 2 week period in my life and it certainly wasn't going to happen now in the middle of winter and treacherous sidewalks and rehabbing an achilles injury.  So I decided to run the 40km which would still be a huge milestone for me since I have ran 40 or more km since August.  I had from January 2 - 15th to complete the challenge and my goal was to do 5, 5 and 10 each of weeks for a total of just over 40 hopefully.  As long as weather and achilles cooperates that is. 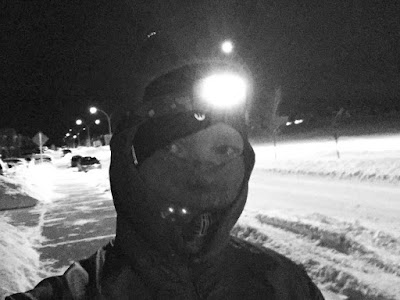 My first run occured the first day of the challenge just before 5am.  With the girls off school and Greg going back to work that day, I had 2 options: run early before he left or later after he got home.  I knew that I had to do it early because I knew I would never do it that night haha.  It wasn't too bad and as I was running I found myself grateful that I had signed up because I knew that if I hadn't then I would have ran on my treadmill and this was so much better.  I ended up running 6.51km that morning.  33.5 left to go. 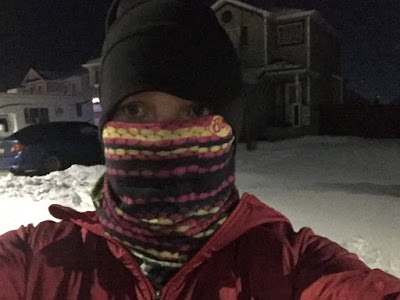 My second run of the challenge was also before 5am so I could get it finished before Greg left for work.  I ran a shorter loop then I had done on Tuesday because the sidewalks were not in good shape and it was getting to be too much working and walking.  When I got home I went to shut strava off when I saw that I never started it.  I knew the distance that I had ran because I run that loop a lot but that means nothing when it comes to the Strava challenge because you can't manually enter in the distance.  Ironically enough, on Tuesday's run I kept checking my iphone to make sure it was working but I didn't this time.  And because strava on my iphone is connected to my iwatch, I never touched my watch and because of all the layers i was wearing, I didn't see it either.  I was sure I started it but I must not have hit the start button or something.  Either way it sucks and I will have to find a way somehow to make up the lost 5km. 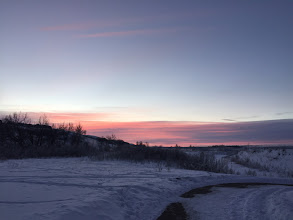 On the first Sunday of the challenge, I found myself at Fish Creek Park at 730am without my headlamp!!  I wasn't worried about getting mugged or anything but mostly about not seeing any icy sections and wiping out and hurting myself. I parked at Sikome Lake and went behind it along 22x towards Lafarge Meadows/Chaparral Valley because there were street lights that would give me some light until it started to lighten up outside.  The conditions weren't too bad and actually better then running through my neighborhood and I managed to get 10km in.  I was really happy with myself because that was the furthest I had run in one setting since my half marathon in September.  I was so cold that it took me forever to warm up when I got back to my house.  When I left both my apple watch + my weather app said it was +1 outside so I switched out my layers but when I got to Fish Creek it was -7 and it stayed like that my whole run!!  I am just grateful that I had a buff in my car to help keep my face warm!! 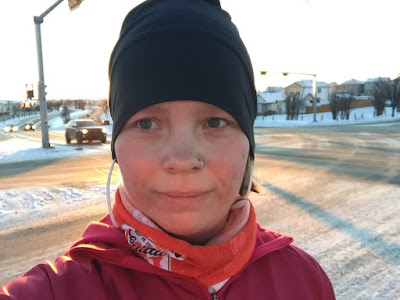 I finished my 40km on Saturday, January 13th with a 8.26k run thru the neighborhood.  I was so proud of myself for pushing through and digging deep and finishing this challenge.  I hadn't ran more then 36k in a month since August so to finish this challenge and still have a month of running to go is a really big deal for me. 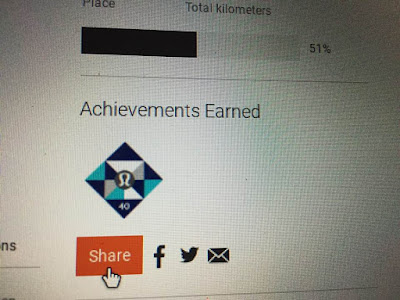 I was a little concerned when I didn't see the badge that we were supposed to get once you finished the challenge but you had to log onto the desktop version of Strava to see it as it was not available in the app.  This badge was really well earned.

When I signed up for this challenge, I did it to push myself out of my short indoor runs and get myself outdoors and push my limits and get that 10k done.  I did that and was so happy that I was able to accomplish this but to sweeten the deal, Lululemon sent me a 25% coupon to use until February 3rd on any purchase instore or online. How awesome is that??  Just another reason to love this company!

Here is what I purchased with my discount: 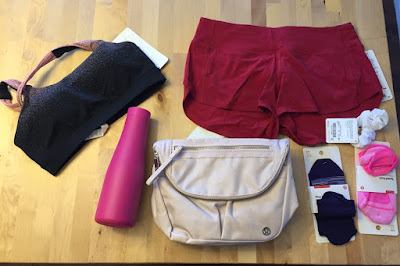 If you remember my post from before Christmas ( you can read it HERE if you need a refresher!), I am obsessed with Lululemon's misty pink so when I saw the Energy bra that matches my shorts ( don't worry I won't wear a lulu tuxedo I promise)  I had to have it!!  And then they had the festival bag in misty pink too!!  I wasn't going to buy this bag since I have a black festival bag that I LOVE but Finley convinced me to do it hahah.  I also bought 2 pairs of socks: one pair for running and one for every day wear.  Lululemon's speed socks are the only ones I wear running and I have a few pairs that have seen better days haha and the ones for all occasions are the play all day socks which I have a few pairs in and they are the only ones I can wear that don't show up in my casual running shoes when I want my socks hidden.  I didn't really need another water bottle but the pink was so pretty I couldn't say no. At the same time they released a turquoise and a navy blue one too and I easily could have bought them all but I had some self control.  Lastly, I bought a pair of speed up shorts in scarlett. I wanted a pair of red ones but the ones I have seen previously were too red and these ones are a really dark, deep shade of red that I love.

I spent more then I originally planned but I figured with how much I upped my running game in January (check out Monday's blog for that post) that I deserved it!!  I really hope Lululemon does another challenge like this, not for the discount, but for pushing me when I need to be pushed.  There is no way I would have upped my game the way I did without this challenge!