We have started off 2018 with a bunch of paint and renovation jobs and so far the only one that is close to 100% done is the basement bathroom.  In mid January, Greg thought it would be a good idea to finish our basement bathroom.  We had a bathroom down there already but it only had a sink and a toilet.  It was plumbed by the previous owners for a shower and they left a bunch of stuff with us when they left but we never did anything with it. 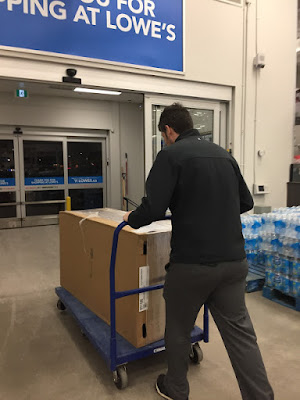 We went to Lowes and purchased a bathtub for it.  Surprisingly, bath tubs are quite light.  I was sure they would the heaviest thing I would ever attempt to live but that was not the case.  We also bought a pantry door which I might add, is still not installed haha. 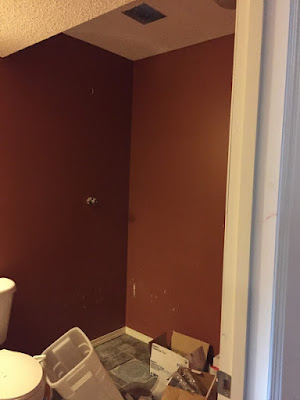 Before Greg started intalling everything, I decided I wanted to paint it.  It was the 10th anniversary of us buying our house in March and this was the last room in our entire house that had not ever been painted.  I hated the colour more than you could possibly imagine so I was happy to have a reason to paint it.  I chose white mountain because that is the colour in our basement. 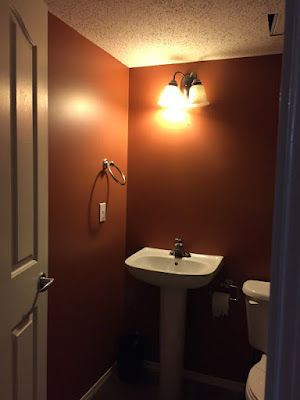 I also decided that that light fixture was headed for the garbage bin too.  It was so ugly and basically disintergrated when I unscrewed it to paint anyway haha. Seriously, this colour is so gross.  When we moved in, the basement stairs were this ugly light lime green, the enclave for the kitchen extension was hunter green, the tv nook or whatever you want to call it was like this tie dyed orange and i forgot what the walls were.  They might have been the ugly lime green too.  It is no longer that ugly hasha.  I did do some painting down there but that is for another post. 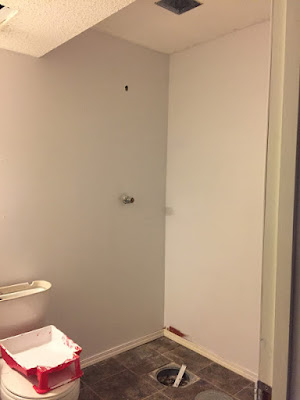 Since the bathroom was plumbed already for a shower and it was going to be too much work for Greg to rework it into a bathtub, we returned the bathtub and bought a shower kit instead.  Turns out the shower kit is the heaviest thing I have ever attempted to lift.  We had to open it up upstairs and carry it down piece by piece. 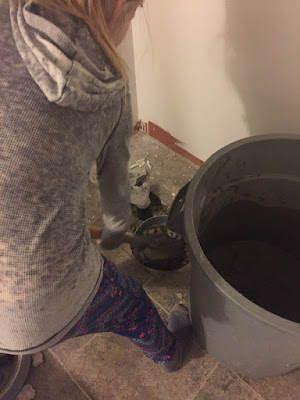 However, the shower we wanted didn't fit exactly with the pre plumbed stuff so we did have to cut a hole in the cement and move stuff around which resulted in Finley making cement with Greg and filling up the hole.  She loved every minute of it. 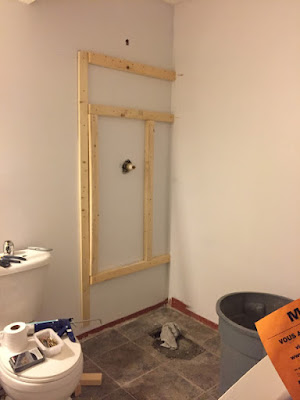 Slowly but surely we were getting to the actual installation of the shower.  It was much more work than either of us anticipated.  Or at least me haha. 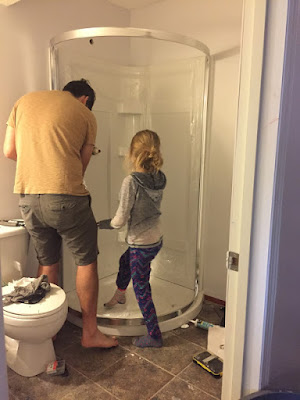 Finley helped a lot with the shower installation.  This is officially her bathroom so she was pretty happy to do it.  She currently just showers in it but I am hoping she will move her teeth brushing and face washing down here too so we can cut back on the constant bathroom fighting between her and her sister.  Right now our basement is a large rec room or something like that and I think next year, we are going to build a room for Finley down there too. 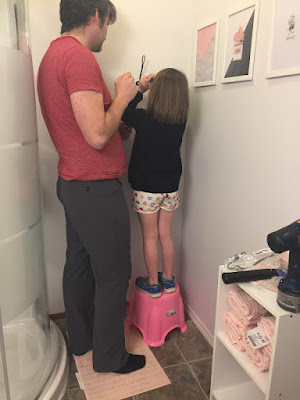 Penelope helped Greg hang the hooks for towels. She loves using a screwdriver and a drill. 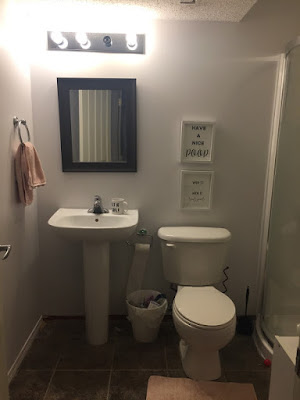 I still need a new mirror and we are missing a light bulb and the baseboards but for the most part it is done and usable. 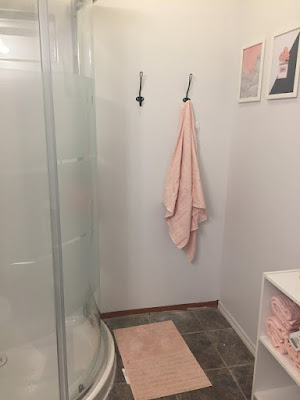 IKEA has new misty pink bath mats and towels so I stocked up on those to use in here and I love it with the new paint. 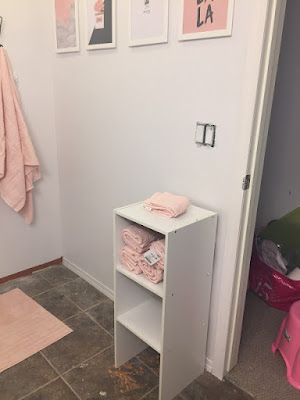 Since it is a pedestal sink and doesn't have a vanity or cupboard space, I bought this inexpensive one from Walmart to store extra shelves and whatever else needs to be stored. 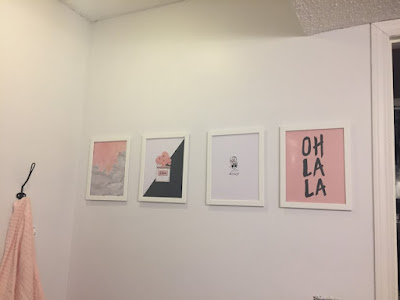 My favorite thing about the entire space are these photos.  They were locally printed by a lady in Legacy and cost me $3.50 total for all 4 and the frames were on sale (or most likely being discontinued sadly) for $1.99 so it was an inexpensive project and the perfect finishing touch. 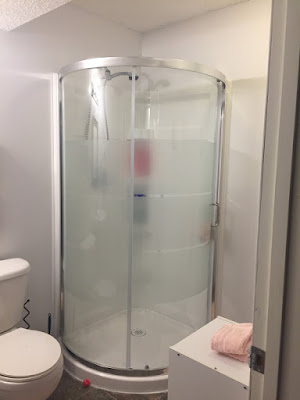 I love that the shower is a circle like and the door is round and really nice,  I am glad we went with this one and not the standard square one that we have in our master bathroom.  This bathroom is now finished and so much brighter and whiter then it was previously.  We are very happy with the end result and we spent only about $700 to do it!!
at April 12, 2018
Email ThisBlogThis!Share to TwitterShare to FacebookShare to Pinterest
Labels: DIY, Home Sweet