Greg and I had the most amazing time while we were in Chicago even if he did have to work for 2 days of the trip.  It was nice to get away just the two of us and explore a new city.  Neither of us had been before, so it was a new experience for both of us.  I think hands down my favorite thing about Chicago was the architecture.  Since the whole city basically burned down in 1871 or around there anyways, all of the buildings are either super new or really well maintained hundred year old buildings and they all intertwine with each other throughout the city. I swear I could have had an entire blog post dedicated to the buildings that I saw and loved. 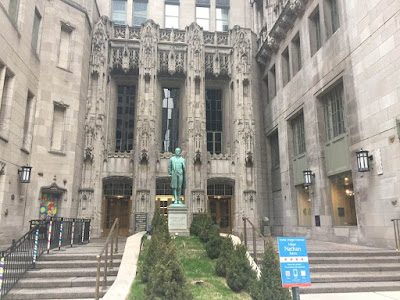 The Chicago Tribune building is one of the coolest and largest buildings that we saw.  This was just a portion of the front of the building. It was truly spectactular to see. 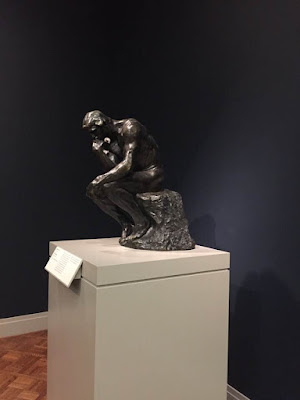 We tried to escape the madness that was Chicago on St. Patrick's Day so we decided to check out the Art Institute of Chicago.  We spend about 2 or so hours going through it.  Greg loved it all while I really enjoyed the contemporary art and was amused and confused by the modern art.  They did have a massive exhibition on Rodin which was really interesting to see. 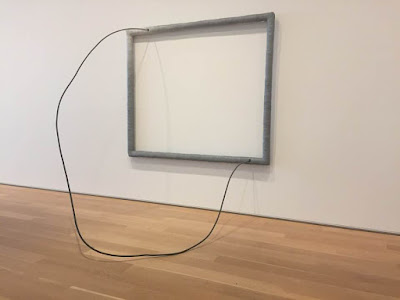 Modern art always puzzles me. Actually there is lots of art that I see in museum that I don't understand how it made it in here in the first place but that could be that I am intrinsically unartistic and uncreative too haha.  This piece is considered modern despite being made in 1966.  It is called Hang Up and is acrylic cloth over wood; acrylic on cord over steel tube.  Throughout the artists career, she explored the expressive, often eccentric possibilities of rigerous, reductive abstraction.  She considered 'Hang Up' to be her first significant work of arts - the first to acheive the level of absurdity or extreme feeling she was seeking. 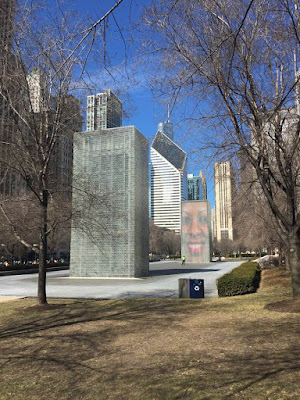 Millenium Park was all locked up to prevent drunk people from getting into the park and potentially killing themselves by hanging off all of the public art and structures within the park. Grant Park was kept open though and that is where a lot of the drunk celebrators gathered when not watching the parade.  This is Crown Fountain and I wish I was there when it was warm enough for it to run becaues it would be so cool.  The fountain consists of 2 50 foot flass block towers at each end of a shallow reflecting pool.  The tower project video images from a borad social spectrum of Chicago citizens, a reference to the traditional use of gargoyles in fountains, where faces of mythological beings were sculpted with open mouths to allow water, a symbol of life, to flow out. 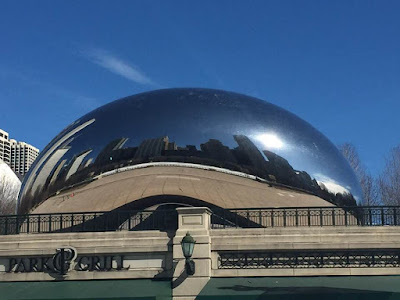 Everybody seems to refer to this as the Chicago Bean but it is actually called Cloud Gate. It is highly polished stainless steel plates which reflects Chicago's famous skyline and clouds above. A 12 foot high  arch provides a gate to the concave chamber beneath the sculpture.  We could only view this from the street near the ice rink but it was super awesome and one of my favorite things. 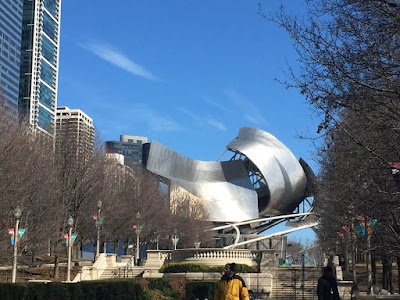 We really wanted to get up close to the Jay Pritzker Paviliion but this was the best we could do.  This pavillion and bridge were designed by Frank Gehry.  It holds about 11,000 people and is home to the Grant Park Music Festival and other free concerts and events. From the streets, we were able to see the Wrigley Square and Millenium Monument 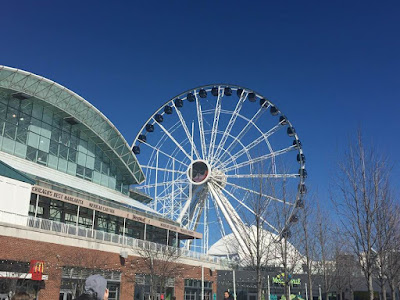 Navy Pier was a cool place to walk out to. It was pretty busy and full of tourists.  We didn't ride the ferris wheel but walked around the shops and restuarants. 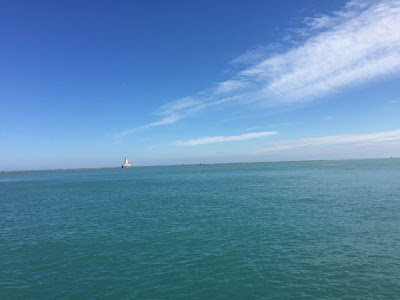 I had never seen a great lake before so it was pretty cool to walk around Lake Michigan.  It was so windy and cold so not too enjoyable in that aspect but wow is it huge and so green.  It looks like a ocean in a tropical destination. 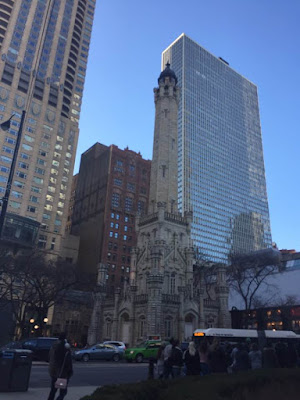 This is the original Chicago Water Tower and if I remember correctly, it survived the fire of 1871 but I may be wrong on that.  Either way, it was a really cool building all on its own.  I thought it was a church so the fact that it wasn't made it even better haha. 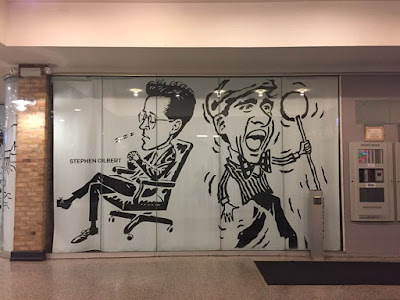 We went to a Second City show and it was so amazing.  It was unreal to be in a building that basically started the careers of so many amazing comedians like Stephan Colbert, Steve Carell, Bill Hader, Seth Meyers, Tina Fey, Rachel Dratz, Amy Poehler, Aidy Bryant, Vanessa Bayer and I could go on and on and on and on and on.  We saw She The People which was really well done.  The first half was definitely better then the second half but it was so good and I would recommend it if you are ever in Chicago.  It was definitely feminist centered and while it wasn't aggressively anti trump, it was definitely pro women.  Greg really liked it too and there were lots of males in the audience who were also enjoying it. 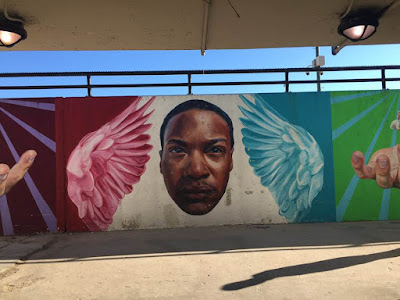 Chicago has so many murals and there are numerous blog posts, instagram posts and websites dedicated to all of them. I had found this while searching for things to do while in Chicago and then subsequently leaving it on my desk in Calgary.  This was the only one we found and we found it randomly one morning while walking along the beaches on Lake Michigan. 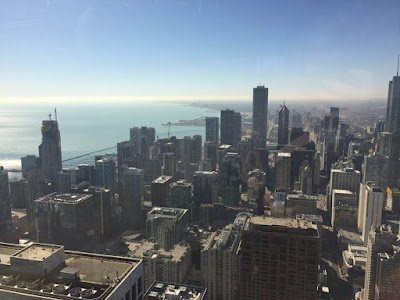 This was the view from the 95th floor of the John Hancock Building which was located across the street from our hotel. It was absolutely incredible how big this city is because when you keep yourself in one tiny area of the city, you don't think it is really that big but it is HUGE!!  From the observation deck, we were able to see the United Center where the Blackhawks play, Soldier Field where the Bears play, Wrigley Field where the cubs play and so many other massive buildings and so much water. 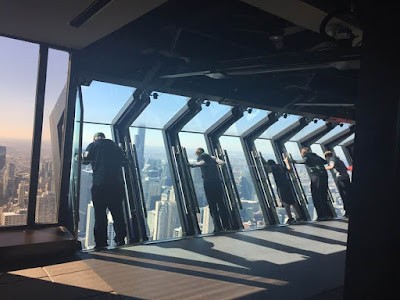 We paid the extra money to go on the tilt which tilts the glass that you are leaning against but it looked much cooler then what it actually was.  I wish it would have tilted more.  The Sears Tower or I guess Willis Tower as it is called now, has a glass floor but it wasn't that exciting either or so we heard from one of the guys who came from Canada for work too.  The Calgary Tower still is the best but I need to head to the CN Tower in Toronto to see if that is better then here. 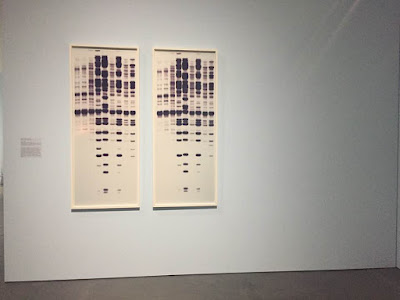 We also visited the Museum of Contemporary Art and I LOVED it.  So many cool things to see and read and soak it all in.  This was on of my favorite pieces of art that we saw. It was called Twin and was done in 1995 and the two photographs depict the artist and his brother.  The images show the results of gel electrophoresis, a technique used in labs to separate and analyze strands of DNA.  While this is scientifi information, it reveals something unique and hidden about the human body.  I would love to have something like this hanging in my house. 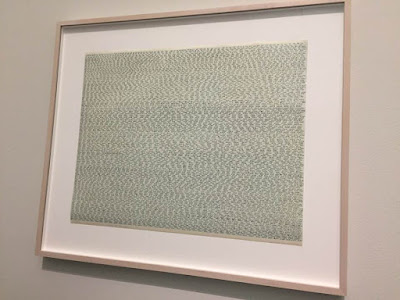 They had almost an entire floor dedicated to the work of Haroldena Pindell who had some interesting work over the years. It was really interesting to see her work evolve over the years as she grew as a individual, fought racidal discrimination and recover from a car crash that changed the way she saw her art.  This one was one of my favorites and one that I want to try to recreate to see if I can understand how her mind worked when doing many of her pieces.  It is called 1-6031 with Additions, Corrections and Coffee Stain, 1973.  She created the work by sequentially drawing thousands of numbers and noting the start and end times of this taks in the lower left hand corner.  For the artist, the act of writing numbers operates on more thean one level: it recalls the ledger books used by her father, who was a teacher and mathematician, as well as the concepts of order and infinity. 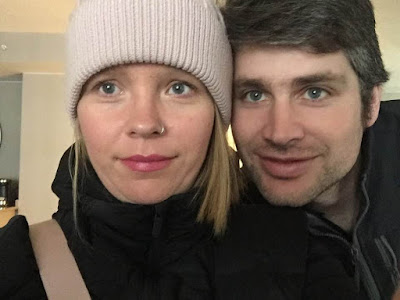 The one selfie that actually turned out of us in chicago and it was in our hotel room haha. 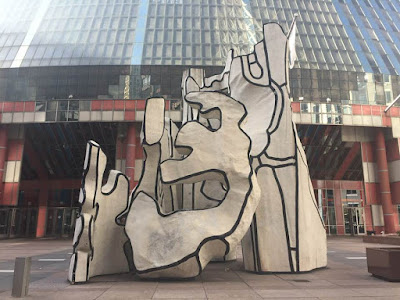 We spent a few hours on the Sunday exploring the real downtown of chicago far away from the touristy shopping downtown disctrict trying to find public art.  This one was my favorite and if you look closely, you can see Greg peeking through. This is located across from City Hall, which was not as exciting or cool as this piece of public art. 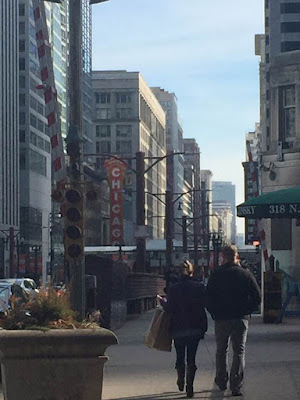 I had really wanted to see the old Chicago Theatre sign and we accidentally came across it on one of our adventures.  It was daylight so it was lit up but I was still happy to cross this off my Chicago bucketlist. 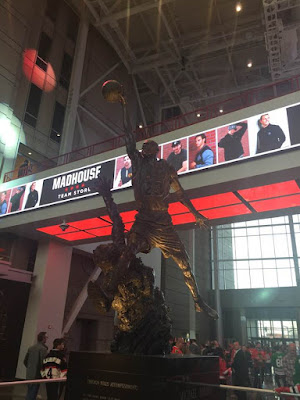 Another item on my bucket list was the Michael Jordan statue.  I thought it would be outside the United Center but it was inside in the main lobby/concourse area.  The  United Centre is almost 20 years old and one of the nicest hockey/basketball arenas I have ever been in. It is nice and bright and the fans are fantastic! 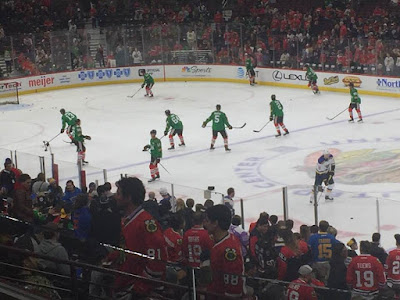 Greg and 2 of the guys from his company and their spouses were invited to the Blackhawks game in a suite by the company that was doing the boilers or something like that.  We had food and drinks and great seats to a game lost by Chicago although they didn't try too hard to keep the lead or the win.  It was their St Patrick's Day game so they warmed up in green special edition jerseys.  They had the best national anthem I had ever heard with the organs from the original Chicago Stadium and they played them again in the third period and was the absolute best!!  I am not a fan of the hawks at all but Jonathan Towes, who is their captain, is probably my favorite non Flames player.  He is one cool dude. 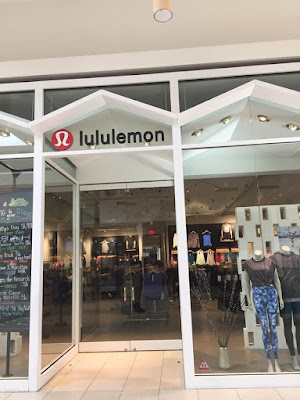 On our last day in Chicago, we ventured out to the massive outlet mall in Rosemount.  It was the first outlet mall I had ever been to where it was all inside haha.  I am eternally grateful that it was indoors haha.  I was excited to find the Lululemon Outlet but sadly left empty handed.  Nothing I wanted at prices I wanted to pay.  WIth the exchange rate and tax, there were not a lot of deals to be had.  We bought a gift for my sister and Greg bought a dress shirt.

All in all, it was a great time in Chicago and while I would never go back in March or any cold month for that matter, I would like to bring the girls back during the summer months and do millenium and grant parks again, go to a cubs game in wrigley field, go to the six flags amusement park, the aquarium, the Field Museum, swim at one of the beaches we walked along lake michigan and Navy Pier. I think those are all things that Finley and Penelope would like to do.
at April 04, 2018
Email ThisBlogThis!Share to TwitterShare to FacebookShare to Pinterest
Labels: Chicago