So I had absolutely no plans for Father`s Day this year since Greg had planned a bike trip to Cypress Hills Provincial Park in Saskatchewan months ago. I had bought some frozen klondike reeses peanut butter sandwiches for when he got home Sunday night but that was it.  I even agreed to watch one of Penelope`s soccer teammates for a couple of hours after their game since he wasn`t going to be home.  So you can imagine the panic that set in on Saturday night when he texted me that they were coming home now instead of the following day.  Apparently Greg`s pedal broke and they decided to turn around early.  This was frustrating not because I had no plans for Sunday but because his bike was just replaced after being stolen last Thanksgiving. 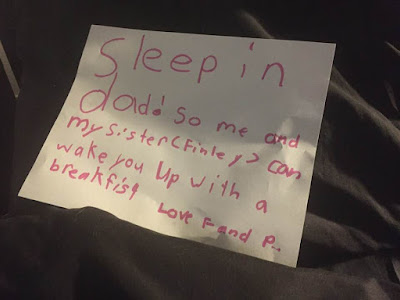 I told the kids that Greg would be home Saturday night and they wanted to make him breakfast in bed.  Penelope made this sign so that he would remember to sleep in which made me laugh because if there is one thing he is good at.......hahah. 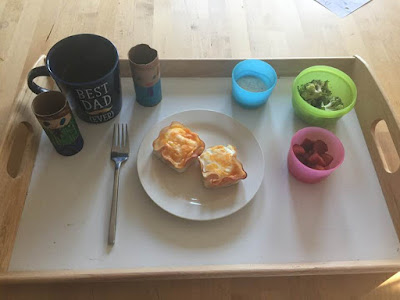 They wanted him to have broccoli and peppercorn ranch dip and some strawberries but weren`t sure about anything else.  So I made the egg and turkey cups in my pampered chef brownie pan and put some cheese on a few of them for Greg.  Then Penelope made him some coffee in the keurig.  We were upstairs with his breakfast before 8am so he didn`t really get to sleep in haha. 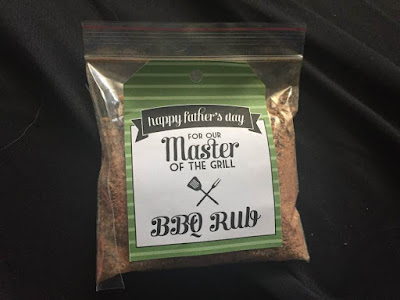 Greg opened Penelope`s present first that she made at school.  She had been telling me about this all week and was very excited for it.  They made a gluten free (yay!) bbq rub and since Penelope knew that Greg loved using rubs when he bbq`s, it truly was a perfect gift for him. 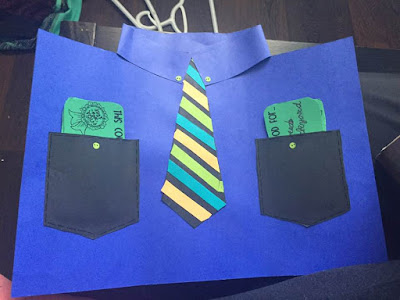 Just like she did for Mother`s Day, Finley went all out for Father`s Day.  Her first gift to Greg was the coupon shirt and she was quite excited for it.  He opened it and read the coupons and I started laughing because everything she said she would do for him are things I actually do.  I will use those coupons wisely haha. 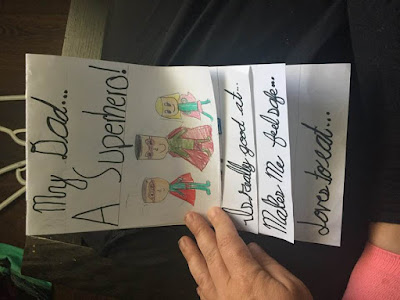 Next was this book she made for him and a door hanger that says Dad`s Day Off that I am sure will be out bedroom door forever haha. 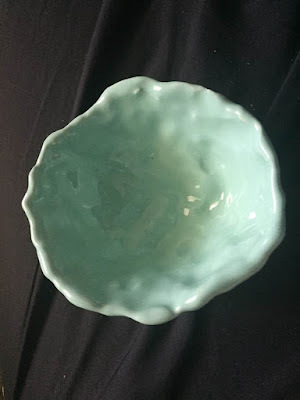 Finley was upset by this because the green she chose to paint it ended up going way too light after they do whatever it is they do to it.  The word is escaping me at the moment.  This is a pinch pod, not an ashtray like Greg said it was haha.  Apparently, a pinch pod is something where you store your change.  I had no idea!  Anyways, I love this very much and I think it will look great in our newly painted bedroom. 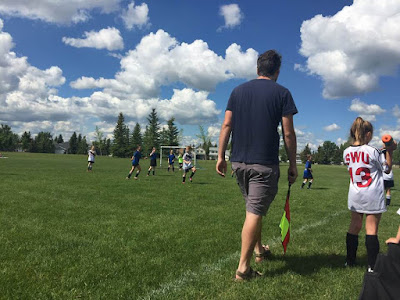 Penelope had a soccer game at 11 yesterday and I made Greg be our linesperson much to his dismay haha. I am the team manager and have that kind of power haha.   The Premiers lost 3 - 1 which was our closest game of our season and Penelope scored the only goal.  She is the leading scorer on this team with 3 goals this season.

We headed home after the game with Penelope`s teammate and I made grilled cheese for everybody.  Surprisingly, Penelope loves gluten free bread (yay!!).  Greg then changed the oil in my car and the kids played for a few hours until S was picked up. 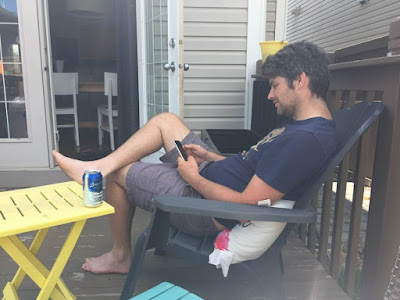 After Greg finished with my car, he enjoyed some downtime on the deck with a beer watching the ribs he was bbq`ing smoke. 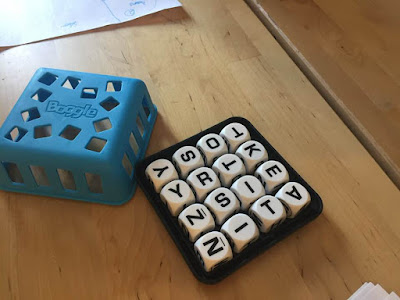 We sat down to play a few rounds of Boggle which I completely dominated everybody haha. 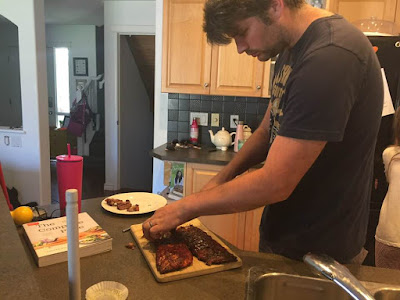 Greg cutting up the ribs that he made using the new rub Penelope made him.  For the record, I had no intention of making him cook on his day.  None.  I went to Sobeys this morning and looked to see what I could find that I knew I could make a good meal out of.  I saw the ribs so I bought them withe the plan of most likely making greek ribs and then I bought some corn on the cob to go with it.  When i told him what i had bought, he asked if I was bbq`ing them and since I have no idea how to use ours and it it is starting to die, that was a hard no from me.  He wanted bbq ribs so he took over the process and decided to smoke them.  Finley did make the corn on the cob though.  It was a very delicious meal. 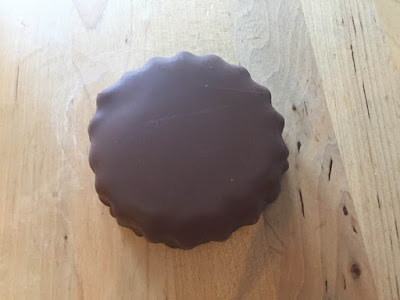 Our peanut butter klondike bars.  I actually had one bite and didn`t love them so Greg got a bonus one since it was his day.  The girls were not happy with this.  The three of them went on a bike ride to the pond and I had a nap.  When they got back, i went for my run and Greg got the girls ready for bed and he was watching TV when I got home.

While it wasn`t a Sunday unlike most of our Sundays, it was nice to show Greg how much we appreciate all that he does for us since some days we all kinda forget.
at June 18, 2018
Email ThisBlogThis!Share to TwitterShare to FacebookShare to Pinterest
Labels: Father's Day, Greg