May Long Weekend Camping Trip In The Elbow Valley

In I guess what I would call better late then never, here is the post on our camping trip on May Long Weekend - which was almost a month ago.  Actually I think it was a month ago on Saturday or Sunday hahaha.  I have been struggling with continuing this blog or not and most of my posts have not been written or are sitting in my draft section unfinished.  Anyways......on to May Long Weekend. 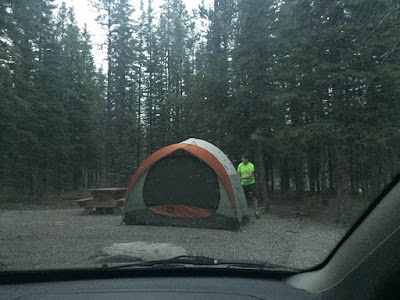 We were driving home from Penelope`s soccer game in Nolan HIll (which if you are not familiar with, is like basically almost in Red Deer from our house and I am not even exaggerating and sadly, Penelope is there again tomorrow night) and it had been hot all week long and Greg was like we should go see if we can get a campsite along highway 22/66 and for reasons that I don`t quite understand myself, I agreed.  We dropped the kids off at home with my mom and grabbed our tent and headed out on the highway.  We are blessed to live about 30 minutes from campgrounds in the elbow valley but unfortunately that means so many others are too haha.  We hit up them all before finding the last site that wasn`t a walk up in the last campground on highway 66.  We (and by we, i mean greg haha) set up the tent in the rain and then drove back home. 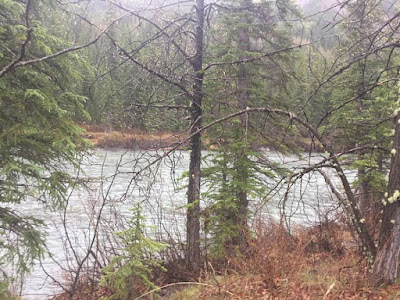 This was the view zoomed in from our campsite.  I think it is called Beaver Flats or something like that.  It is just down from Elbow Falls and Beaver Lodge.  It had rained all day in Calgary and soccer was cancelled so we were able to get away earlier then we had planned. 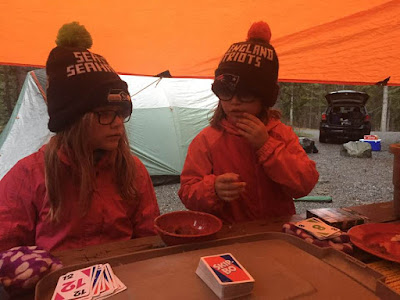 However, it was also raining at our campground so we were basically limited to what we could do haha.  We ate some chips and played some skip bo before heading to bed. 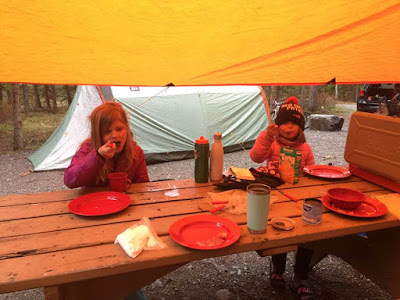 It was very cold out on Friday morning and I was so desperately wanting to go home.  Thankfully I remembered some earl grey tea and my yeti and was warmed up by the goodness of my tea that stayed warm for a long time.  Greg made us bacon and thats it because we forgot to buy gluten free pancake mix at superstore before we headed out. 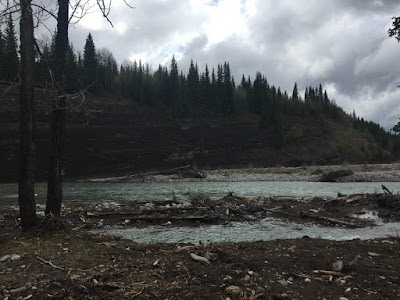 We had planned on hiking Forgetmenot Pond which is one of my favorite places to go to but unfortunately it was closed due to renovations of some kind.  I assume they are making the parking lot bigger but I have no idea really.  A lot of the hikes in the area are way harder then I was willing to do since I was running the Calgary Marathon the following weekend and so I was only on board for short, flat and easy.  That doesn`t leave us with a lot of options.  We did find a short flat hike to do although it was more like a walk then a hike to be honest. 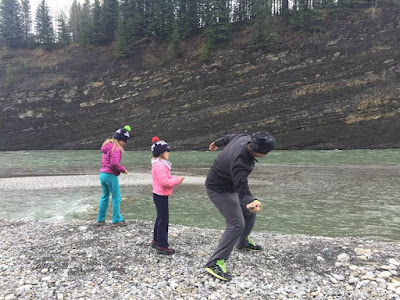 Greg again taught the girls how to skip rocks since they always forget.  They were able to skip them pretty far. 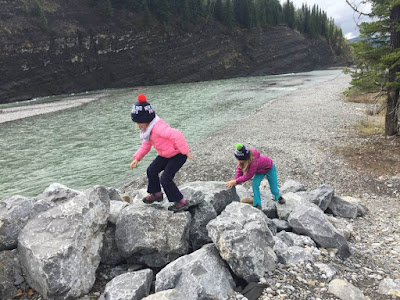 The girls climbed some rocks while I walked behind and beside haha.  Greg had climbed them ahead of them.  This might have been their favorite part. 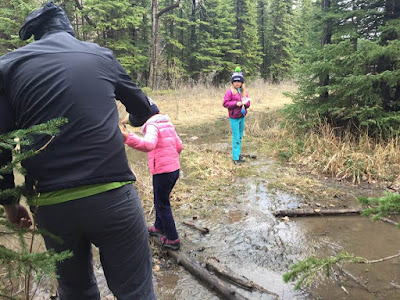 We kept going along the path and there was a lot of water flooding the paths that made for some fun adventures trying to navigate them. 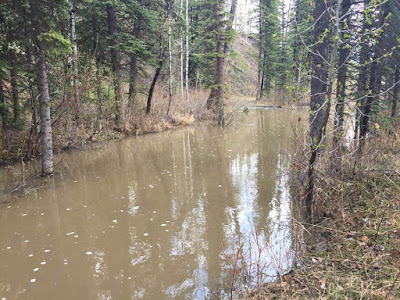 Eventually we had to turn around since the water was too high and there was no safe way for all of us to get across to the other side of the path.  On our way back, we saw a few beaver dens being built.  I was so over camping and being cold and Greg asked me if I wanted to go home and they would camp the second night just the three of them.  I was totally on board with this but Penelope wanted me to stay so I did.  We went back to the campsite for lunch and Greg and the girls played skip bo and then I was still cold so I went to have a nap inside the tent. 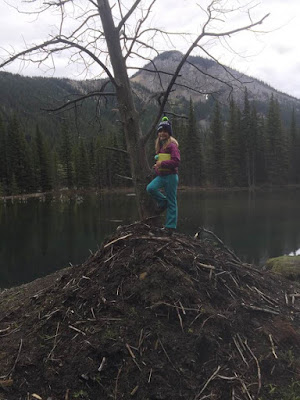 While I napped, Greg and the girls went for a bike ride over some hills and through some mud.  I like hills but not mad so not too sad that I missed out haha.   The girls had a lot of fun but were worried I would be mad because their clothes were dirty and muddy but I was like there is a reason they are camping clothes hahaha. 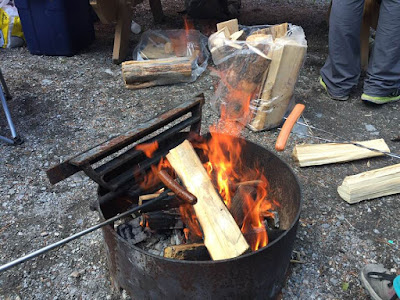 By late afternoon, it finally warmed up and I wasn`t freezing anymore.  I think had we driven out Friday morning instead of Thursday during the rain I probably would have enjoyed the day more but I had gotten so cold Thursday night that I found it really hard to get rid of the chill.   Greg started a fire and we roasted some hot dogs for supper.  I had bought à bag of gluten free hotdog buns from Safeway that were soft and as good as regular gluten hot dog buns.  Greg pulled them out of the bag and was like they are still frozen and I was surprsed because they were never frozen in the first place but that was hard they were!!!  $7 for 6 hot dog buns that were inedible.  Thankfully Penelope doesn`t really like the buns because they made her sick a few years ago so she wasn`t too upset about it. 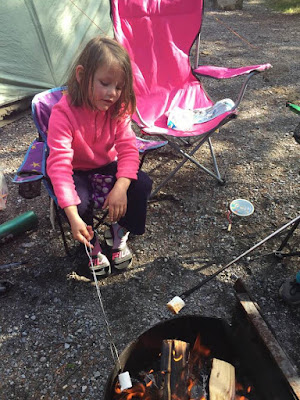 Soon it was time for smores.  We found gluten free graham crackers at Superstore and marsmallows are gluten free and aero bars are gluten free so she used that for her smore. It took her a few tries to get her marshmallow perfect... 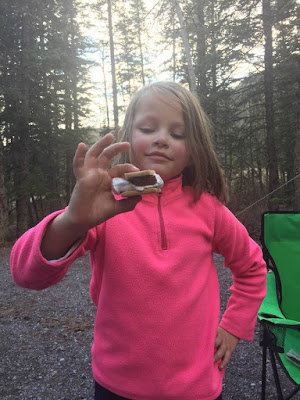 But she soon had her perfected gluten free smore.  She said it was delicious and that is good news for us! 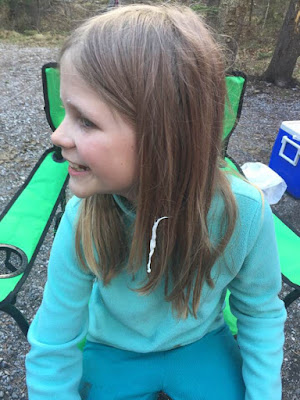 Finley was most proud of the marshmallow she got in her hair.  I was hoping it would attract bears to our tent and we would be evacuated but no such luck. 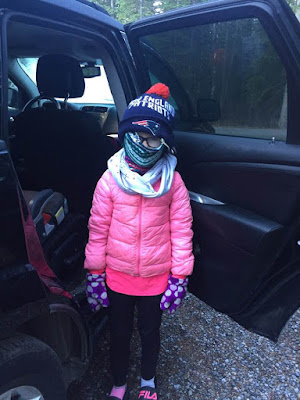 We were up early on Saturday morning since we had to drive back to Calgary and holy cow it was cold.  It was so cold that we didn`t even eat breakfast there and just waited unitl we got home.  I wanted to get home so badly, that I even packed my own sleeping bag and if you know me, you know that is a BIG deal haha. 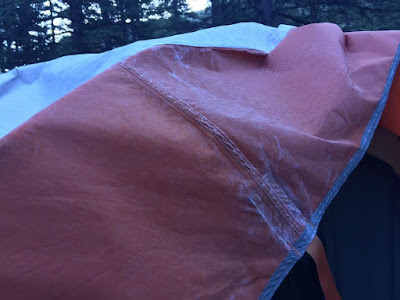 We had frost all over tent, our car windows were covered in frost and I was charging my apple watch in the vehicle and it actually turned off because it was so cold.  That has never happened before.  It was far colder Saturday morning then it was on Friday but that was because all the clouds cleared making it colder.  I am so grateful that we had to be in Red Deer on Saturday for Madi`s graduation bbq and that we didn`t have to camp for another night or two hahah.

It was by far the coldest camping of my life and I have declared that I will no longer go camping before Canada Day weekend.  Also, winter camping will never be on the table for me haha.