On Sunday, I ran my 13th (!!!!) half marathon in downtown Calgary.  The race was put on by the Divas Running Series and was only the second one in Canada this year and the first ever in Calgary. 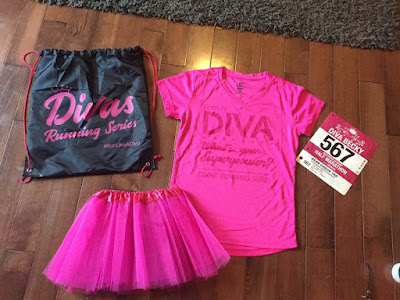 Package pickup was from 430-730 on a Friday night downtown at the Westin or all Saturday from 9-5 also downtown at the Westin.  The times or location for that matter did not work for me so thankfully Shannon was able to pick up my package for me.  Hopefully next year, they put it in a more convenient location with better hours on the Friday.  I do love the pink running shirt but not sure how I feel about the DIVA Becky on my bib hahaha. 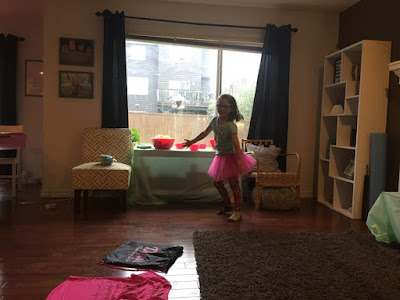 Immediately after I got home the girls were fighting over my tutu.  Penelope got it when I offered  up the bag to one of them.  Finley was excited to get the bag.  Since I will never use either, I am glad they are going to a good home haha. 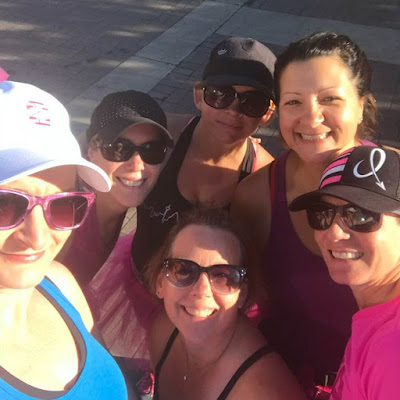 Sunday morning before the race.  The race started at 8am and I wish it would have been at 7.  It was really hot and so humid after all of the rain we got the day before.  I was so nervous about this race and my achilles holding out for the entire race that I made myself sick the day before.  My stomach ached and it was very uncomfortable.  I made myself go to the bathroom twice before I left my house in hopes that I would be ok during the race. 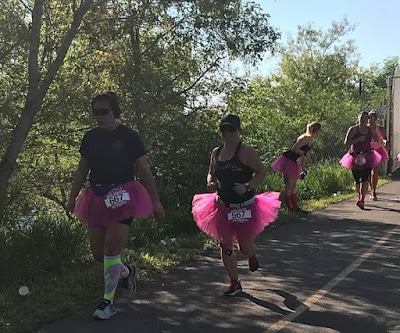 I started out feeling ok but that only last for a few km`s.  I soon felt like i needed to go to the bathroom everytime I ran.  Just like I felt during Seawheeze.  I didn`t want to wait at any bathrooms so I suffered for about 7km before I found public bathrooms with no wait right off the course at the Bow Habitat Station.  After that, I felt mostly better but now of course my achilles was tired and I was tired and so it was still a struggle to finish the race.  I found that that there wasn`t enough aid stations in the right places.  We went what felt like a really long stretch of the race in the hot sun without any aid stations and that was tough.  Also, the course was really wierd and awkward and I didn`t really like it.  This compalint was common for a lot of runners.  The course had very few marhsalls and not enough signs and you weren`t always sure you were entirely going the right way.  I know several girls who did go the wrong way and ended up running far more then 21.1km which would have sucked.  And perhaps the worst part of all??  The kilometer markers were SO wrong.  They said at the beginning of the race that they were off but I cannot believe they were off as much as they were.  Like at the 5k mark they said it was 6k and then at the almost 18k mark, they said it was 16, and some km markers were like 400m apart.  After the whole weird st patricks island loop, someone asked me what distance I had and we were chatting about the km markers and she called it a real mindf**k and she was not wrong.  It was terrible.  It did have pretty scenery and although I appreciated the coldness of the freezies, the sugar almost made me sick. 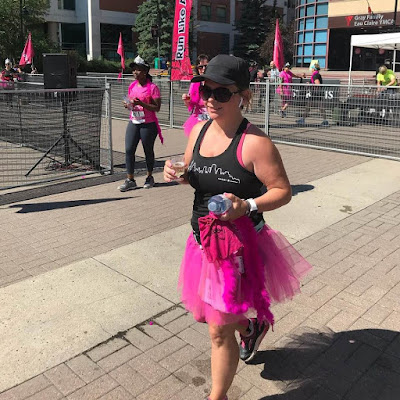 About 500m or so from the finish line, we received our boa + tiaras.  I was way too hot for the boa to be near my body and the tiara didn`t fit around my hat or giant hat haha.  Both have been claimed by Finley + Penelope also haha.  I did appreciate the champagne that we got once we crossed the finish line.  I didn`t like that the medal was handed to me in a bag and not put around my neck as I finished. 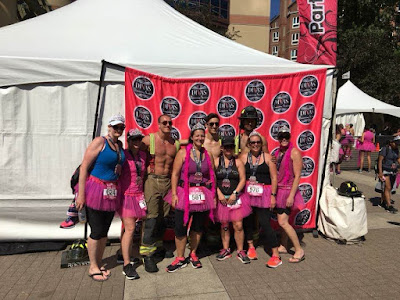 FINISHED!!!!   As you can see, I wore the tutu that came with our race package.  I had zero intentions of wearing it but a group text the night before convinced me to do so haha.  It was a little annoying at times but overall it didn`t bother me as much as I thought it would.  I don`t think I would run in one again though haha.  I am so proud of these ladies and the success they had on Sunday.  They inspire me and encourage me in so many ways and I feel so blessed that I get to run with them.

When you spoke to me on Sunday about this race, I would have said that I wasn`t disappointed in myself because I knew going in to this race that I wasn`t ready mentally or physically.  I had only had 27 days between races, and while I still ran consistently, I never pushed myself to run more than 10k and I was mentally over running.  I had started to hate it which was disappointing because I know I love running.  And having an achilles injurty does not make things easy.  Although, my left achilles which had been causing me grief these last 11 months barely bothered me on Sunday.  It was my right one that nearly killed me.  I can`t seem to catch a break with it.  But waking up on Monday morning, I was disappointed in myself not my finishing time because I had just ran my 13th half marathon and that in itself is a victory and something I should and am proud of.  I am disappointed that I had such a bad attitude going into this race and I wonder if maybe I thought more positive thoughts that maybe I would have had a better race??  I can honestly say that the only enjoyment I got out of Sunday`s race was when I crossed the finish line because it was over.  And that is so disappointing to me.

I have three months until my next half marathon and hopefully I can rehab both my achilles so that they are both in working order.  I have decided to take the summer off from bootcamp to help heal the nagging injuries which is hugely disappointing to me.  I don`t plan on doing any running again until at least after the long weekend and then I will test it for short runs.  I have done physiotherapy, massage therapy and accupuncture on my achilles and any success I have is only temporary.  I don`t know what else to do to make it better.  If anybody has any suggestions, please let me know!

As for this race, I don`t think I will run this one again.  At least not the half.  I love the Calgary Marathon too much to give it up and 27 days between races just isn`t enough for me to properly recover.  Last year I did 41 days between races and that was a much better number.  I think next year, I will run the 5k or I will vounteer on race day because I do think they need more of those.