On Saturday, we celebrated Penelope's 8th birthday.  She had her school friends party back in June and her family party was on Sunday so it was a pretty quiet day - especially since we had just returned from vacation the night before and we were all pretty tired. 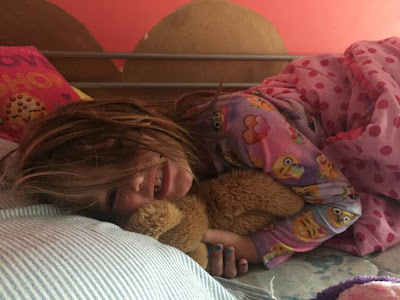 It is birthday tradition in our house to get a photo of each child as they are waking up on their birthday morning. It has gotten a lot harder since we got Penelope a loft bed haha. 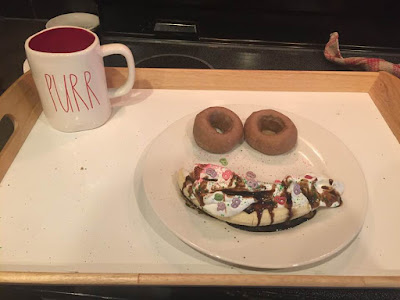 Also a tradition is a special breakfast.  Somehow Penelope decided last year that it would be served in her room.  She requested a banana split for her breakfast but I vetoed the ice cream haha.  I also found some maple glazed gluten free donuts at Sobeys that I got for her too.  She said they were pretty good and both Greg and Finley liked them too. And they are $6.29 for 6 donuts which is cheaper than Tim's I believe. 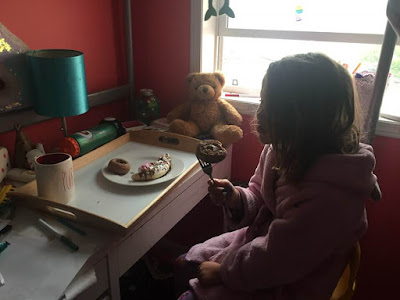 Since I can't serve her on her loft bed and her couch was full of dolls, she made space on her desk for tray. 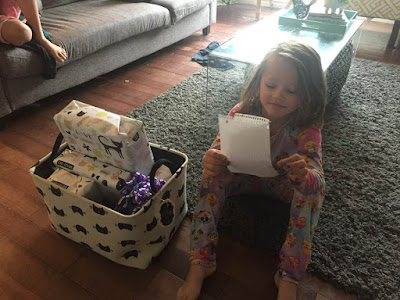 As soon as she was done eating, she made her way down stairs to finally open her presents. 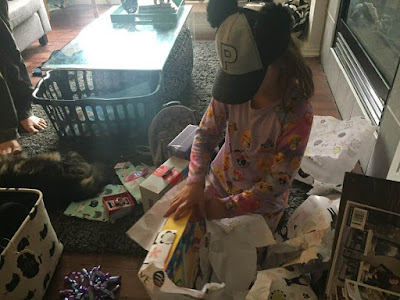 She was very excited that I got most of the items on her list.  Now she has to make a new list haha. Pizza loved the wrapping paper and she also had a few naps in the kitty basket before Penelope put it in her room. 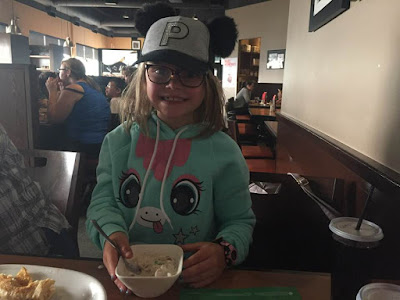 Normally the girls get to pick a restaurant for their birthday supper but since we had no food to eat for lunch, we had a birthday lunch instead.  Penelope picked Boston Pizza because she loves their gluten free pizza.  She was also excited to have ice cream for dessert. 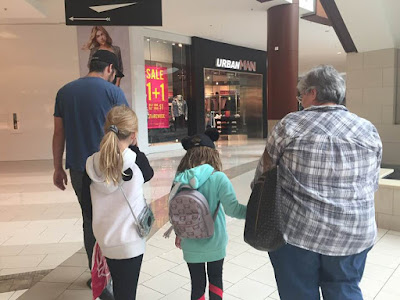 Grandma Gail also made it down for a quick visit.  We had planned to go to the corn maze but the smoke was so bad that it was impossibe to do any outdoor activities.  We went shopping instead and she bought a few things at Justice with her allowance and Grandma bought her a new outfit for her birthday which also works as a back to school outfit! 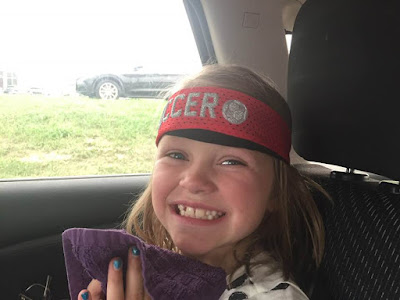 We got her the Justice Soccer Leggings for her birthday and she was excited to find a matching new headband too.  It was very nice of Justice to do this years soccer gear in SWU colours! 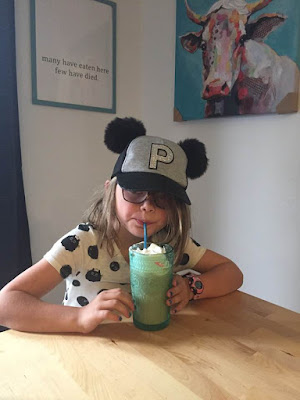 Penelope played her fantastic gymnastics  game for hours and then she requested caesar salad with homemade dressing and bacon with a side of kernel corn (strange kid haha).  Brad and Kari came over for supper too since Gail was in town and for her birthday dessert, she chose homemade chocolate milkshakes.  It will be the first and only time I will ever make milkshakes hahah. 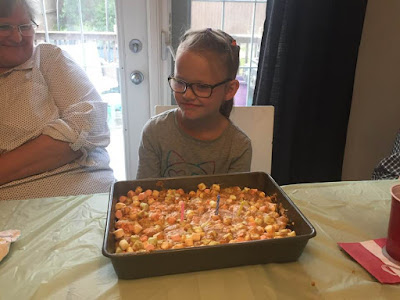 On Sunday evening, we had some family over for dinner.  A few months ago, Penelope had mentioned that she wanted puffed wheat cake for her bithday but since she cannot have gluten we made a double batch of butterscotch confetti.  I put the sauce on while it was too hot and melted a bunch of the marshmallows but it was still pretty delicious.  It was the perfect way to end Penelope's 8th birthday celebration.
at August 21, 2018
Email ThisBlogThis!Share to TwitterShare to FacebookShare to Pinterest
Labels: Birthday, Penelope