Last weekend the temperatures here in Calgary were going to be quite high and camping seemed like a good idea but since you have to book like months and months in advance and it was late Friday night the odds were against us.  But somehow, we got the very last campsite probably in Southern Alberta at Writing On Stone Provincial Park.  None of us had ever been there before so we were quite excited - especially since there was a beach of somekind there. 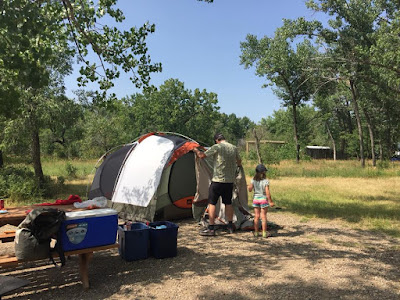 Apparently we got the site we did because someone didn`t show up to their reservation on Thursday and they cancel it and we got lucky and got it.  It isn`t a large campground with maybe 60 sites and most sites don`t have a lot of privacy but since we were just there for one night that wasn`t a big deal.  We quickly got our tent set up and had lunch. 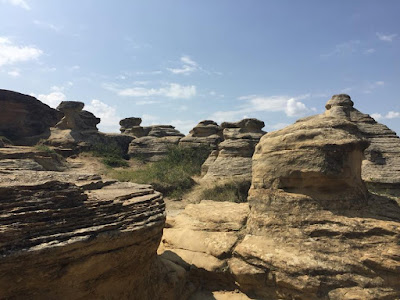 The campground is basically surrounded by hoodoos for miles and miles.  They have a very popular hike called the Hoodoo Trail that we decided to do.  It is only about 2km each way and relatively easy with some spectacular views.  The downside???  Rattlesnakes!!!  These creatures are quite common in this area and live in the hoodoos.  They do clear the campsites so that there are no snakes there - thank god. 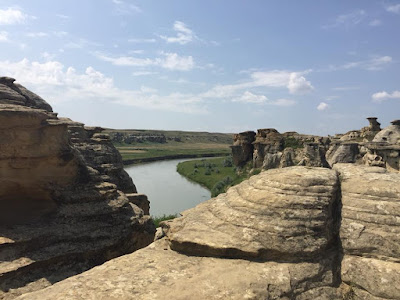 It was such a hot hike with almost not a single drop of shade the entire time.  This is the Milk River that goes through the provincial park. 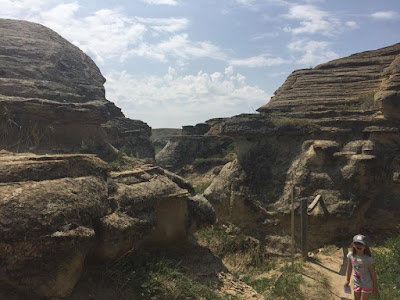 Apparently, it is one of the largest areas of protected prairie in the Alberta park system, and servies as both a nature preserve and protection for a large number of aboriginal rock carvings and paintings.  This park is important and sacred to the Blackfoot and many other aboriginal tribes. 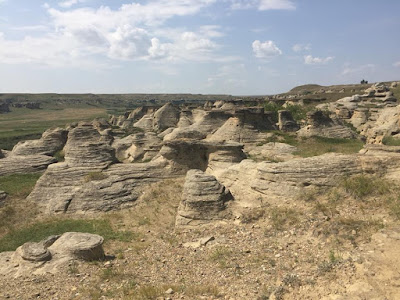 Hot dry desert land.  They make it pretty easy to get around the Hoodoo trail.  We went after lunch and it wasn`t too busy.  I would imagine that it is busier earlier in the morning when it is much cooler. 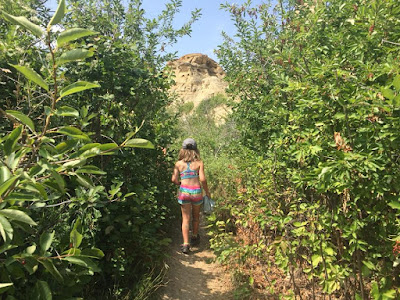 We were pretty scared to go through the treed area despite the shade that the trees granted us even temporarily.  We were worried that a rattlesnake would jump out or something.  The girls and I were pretty on edge until we got out of the area. 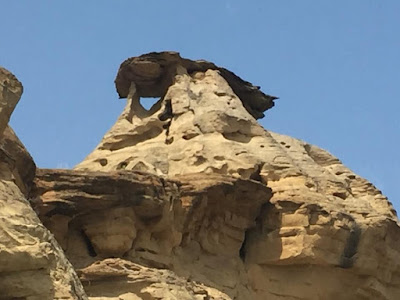 The hoodoos are so amazing.  I have seen them in other places here in Alberta and in Utah, but these were pretty awesome.  Utah is still better but these are the best in the province.  The windows are the coolest.  Birds make nests in the holes of the hoodoos but we didn`t see any.  The girls and I were afraid there would be snakes in them but there weren`t. 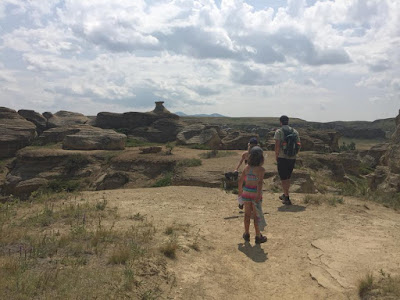 Honestly it didn`t even feel like we were in Alberta anymore.  It was more desert like then the Drumheller area.  Penelope actually thought we had left alberta haha. 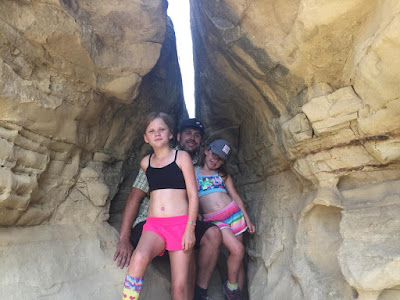 Hiding in a cave.  It was cool in there haha. 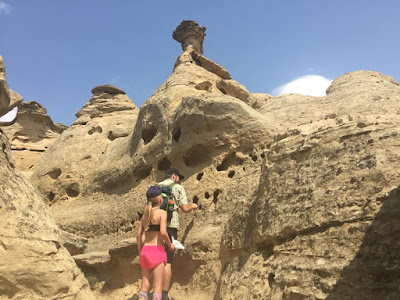 Almost to the end of the hike - or at least the turn around part.  We were finally getting to the actual writing on the stone part of the hike. 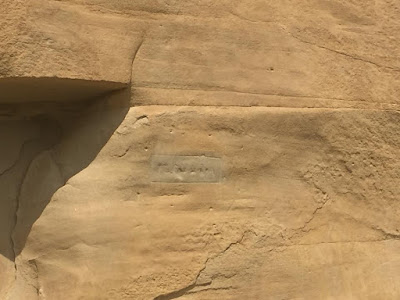 Native Tribes such as the Blackfoot probably created much of the rock carvings (petroglyphs) and paintings (pictographs).  There may have been some other tribes that left thair mark on the hoodoos too.  This wasn`t the big exciting carvings but it was the lesser important parts of it. 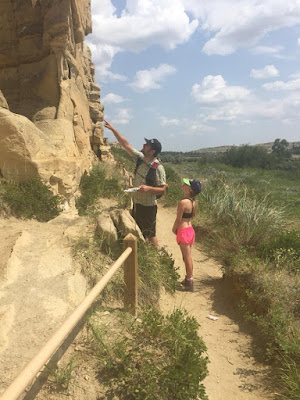 Penelope had zero interest in the carvings but Finley quite enjoyed it and Greg was happy to share it with somebody haha. 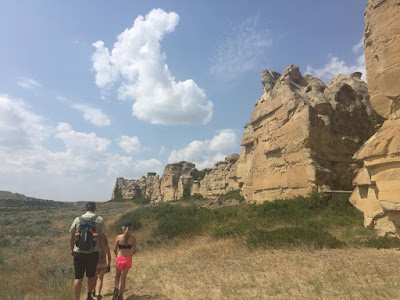 The highlight of the hoodoo hike is the turnaround part called the Battle Scene.  Unfortunately, Penelope never got to see it because just after this photo was taken, we heard a rattle.  And it was a rattle like we had never ever heard before.  And we knew exactly what it was.  Immediately, Penelope took off in the opposite direction and I was soon behind her.  Finley saw the tail of the snake and she too followed.  Greg eventually caught up with us and he said he saw the snake slithering away.  He convinced Finley to go back see the writing on the scene but Penelope were having no part in that and we hurried back to the park where the hike started.  Apparently it was pretty cool to see but it just wasn`t worth it imo haha. 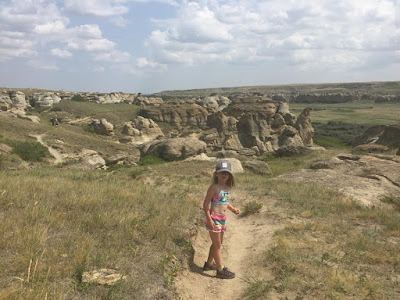 Penelope was pretty freaked out by every sound we heard all the way back.  It didn`t matter that it was nothing like the sound of the rattlesnake.  All the way until we got to the snake, I was like this is such a great hike and then all the way back, I was like this is the worst ever.  In case you don`t know, I have a crazy fear of snakes.  We saw one once hiking in South Dakota and it was only a garter snake but I hyperventilated and had a panic attack.  It was not fun.  I have no idea what I would have done had I actually seen the rattlesnake.  Probably packed up and gone  home. 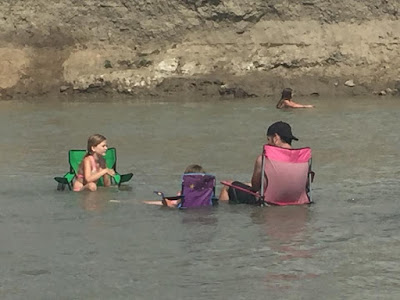 Eventually Finley and Greg caught up to us at the park and we celebrated not getting eaten by a snake with freezies from the Hoodoo Hut which is the only store at the campground.  It was so hot  that it felt so good.  We then changed into our swim wear and headed to the river to cool down.  It was a nice little area to cool down and not worry about snakes.  Greg and Finley did got for a 20 minute float but Penelope and I passed on that. 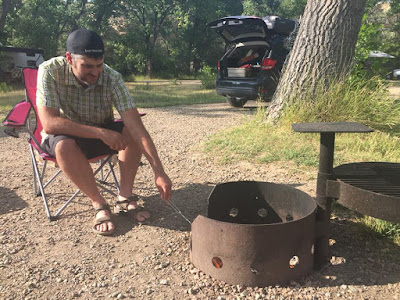 It was so crazy hot out that the last thing any of us wanted was a fire at this point, but we brought hot dogs for supper and cooking them on the campstove is just not right when you have a fire right there.  It was so freaking hot but we got our hot dogs and smores cooked up perfectly.

The visitor center was having an evening program that night on snakes so naturally Penelope and I stayed at the campsite.  I knew there would be a snake there and I was right.  Greg has a photo of Finley holding a snake which will not be included in this blog post haha.  Apparently the rattlesnakes on the prairies are not aggressive like the ones in Texas so I guess that is a good thing.  And they don`t like biting humans and wasting their vemon (not sure if this is spelled right or not) on us.  They are apparently more afraid of us then we are of them but I call bullcrap on that haha. They recommend that you wear closed toed shoes when you do the hoodoo hike so that snakes don`t bite you and last week some guy did it wearing sandals and the snake bit him and then he had an anaphalactic reaction to it.  I can`t even imagine being there when that went down.

While they were at the snake show, Penelope and I played to rounds of skip bo where we each one once, I got a sliver on my finger that I thought I got out, we went for a long walk around the campground and made 2 trips to the bathroom.  It was nice to spend some time with her since she had been at soccer camp all week and I hadn`t seen her much. 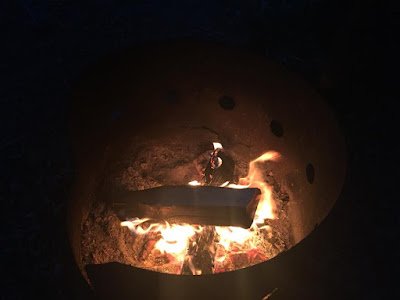 When Greg and Finley got back it had cooled off enough for another fire.  It was so clear and you could see so many stars.  It was the exact opposite of our first 2 camping trips where it was cold, cloudy and rainy. 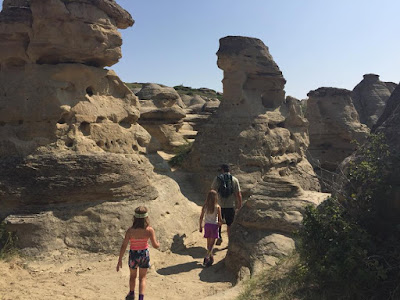 The next morning, we all slept in late and then we had breakfast and packed up the tent and then we went to play in the hoodoos.  There are hoodoos all around the campground that you can explore and play in.  There are easy routes and harder routes.  Finley loved it. 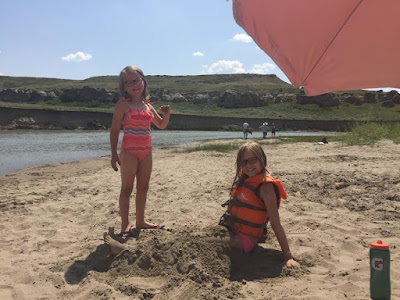 We then spent a few hours at the beach before heading home.  It was less busier on the beach than it was the day before since we were there earlier and it was so nice.  The girls had so much fun and were sad to leave it all behind - especially since it was so freaking hot and we had a 3.5 hour drive before we would be home. 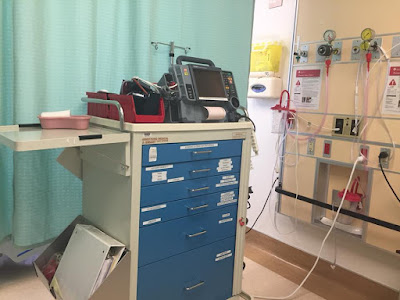 Unfortunately we had to make a pitstop at the hospital in Milk River which is about 30 minutes from the campground.  It turns out that the sliver I got the night before was still in my finger and when I woke up on Sunday morning, my finger was swollen twice the size and was so red that it looked like it had been sunburnt or something and it hurt so freaking much.  We tried getting it out with tweezers but we couldn`t and then we noticed that I had 2 slivers and by trying to get the one out, we pushed the other further in.  And, it was oozing puss and blood too.  So I went in to the ER extremely embarrased but they were super awesome and the doctor got it out for me.  It turns out that i had an infection in there already and he said it was good I came in.  Or maybe he was telling me just to make me feel better haha.  After that, we stopped in Lethrbidge for supper and made our way home eventually.

Despite the rattlesnake, it was such a great weekend away and we really loved the beach given how hot it was.  I don`t know if I will ever go back because snakes but if you are looking for a small, quiet, no cell phone service campground, it is only 3.5 hours south of Calgary.  Make a reservation though because it fills  up quickly.
at August 01, 2018
Email ThisBlogThis!Share to TwitterShare to FacebookShare to Pinterest
Labels: Camping, Explore AB, Hike AB, Hike With Kids, Outdoors, Summer 18, Writing On Stone Provincial Park