On Friday, we went to Calaway Park for the first time in 7 years.  Last time we went, it was just before or just after Penelope's first birthday haha.  She obviously had no memory of it and I don't think Finley really did either.  There is no reason why we never went, we just never made time for it. Needless to say, the girls were very excited for it. 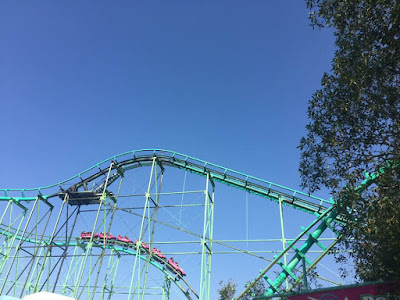 The first ride we hit up when we got there was the Voltex or whatever the rollercoaster was called. We had to wait 4 rides before we finally got on.  I am glad we went when we first got there because the line up was well over an hour as the day dragged on.  So for that reason alone, we only rode this ride once despite it being a favorite. 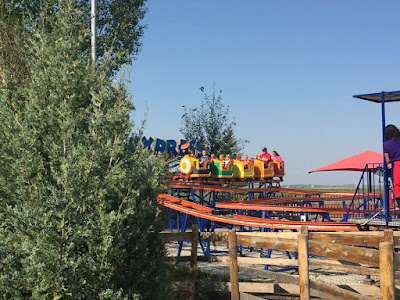 There was one ride that Penelope couldn't ride so while Finley and I were on that ride, she + Greg rode this one.  It was as lame as it looks and Greg said when they got off the ride, the girl asked if she had fun and she replied no hahaha. 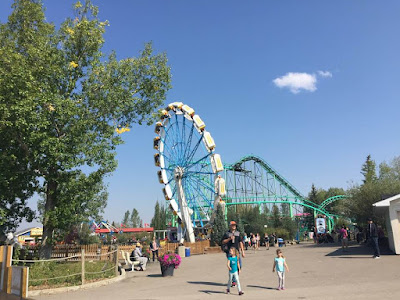 This was the ride that Finley and I went on that Penelope couldn't go on.  To begin, it lays flat and you get into the carts.  Then the carts start to move and the wheel starts to raise and keeps going until it is straight up - if that makes sense.  I was already feeling sick when I got on it and so it couldn't end soon enough but Finley loved it hahah. 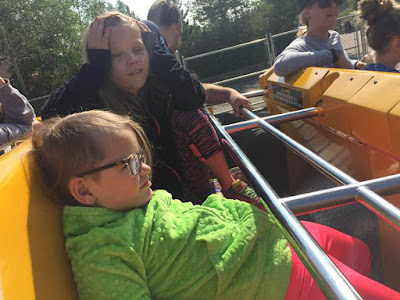 Greg convinced me to go on the rocking boat and I really shouldn't have hahah.  And I really wanted to get off of the ride when it broke and the bars wouldn't raise so we were stuck on it until maintenance came and was able to finally get us out of there. 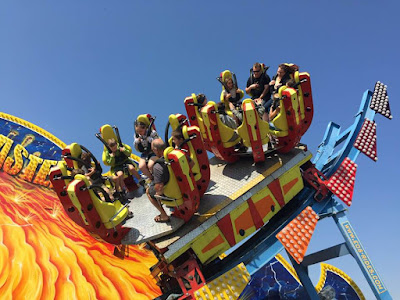 Only Greg wanted to go on this ride and somehow he convinced us all to go on it.  However, he was too tall for the ride in the end and had to get off of it while the three of us had to stay on.  It was brutal and pretty much destroyed me for the rest of the day.  I love rides but I am more partial to roller coasters and not rides that just go around and around and are very spinny which is basically all of the rides at Calaway Park. I kept my head down and eyes down and barely survived.

For lunch, we went to Timber Falls Pizza Co because it was the only place that had any gluten free lunch options.  Penelope got a gluten free cheese pizza which she didn't really like.  Greg, Finley and I each had one massive slice of pizza.  Greg and Finley had hawaiian and I had pepperoni. I don't really like pizza but it was so good.  The sauce was good, the crust was amazing - I just would have liked to have more than 2 pieces of pepperoni. 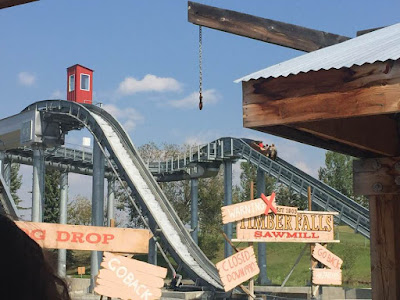 After lunch, we finally went on Timber Falls or as I call it, the log ride.  That's what I called it as a kid and that is what I will continue to call it haha.  They redid the ride a year or two ago and one of the signs says that it was closed down in 1990.  That seems far too recent for that to be a real thing haha.  It wasn't overly warm and so it was so cold when you were on this ride and the wind is fierce when you are wet haha.  We ended up riding this ride 3x before going home. 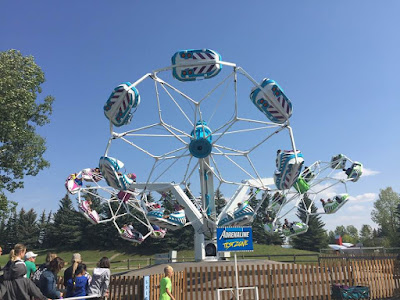 Finley and Penelope loved this ride.  We rode it once as a family and then the girls rode it 2 more times on their own.  They were so excited to ride rides alone and they covered a lot more than Greg and I did. 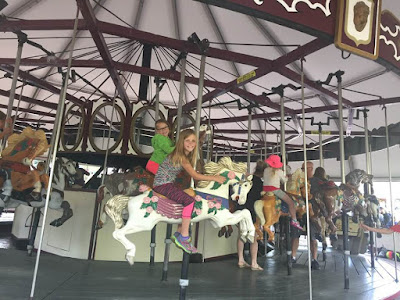 We ended up spending more than 7 hours at Calaway Park and as much as I enjoyed our day there, I was so happy when we got into the car and headed home.  I was exhauasted!   I don't see us every getting season passes for the park, but I do see us making more of an effort to come at least once per year and not waiting another 7 years to visit.
at September 04, 2018
Email ThisBlogThis!Share to TwitterShare to FacebookShare to Pinterest
Labels: Calaway Park, Calgary, Explore AB, Explore Calgary, Explore YYC, Gluten Free, YYC